“I think it’s important that we are aware of the bigger picture no matter what our job is — infantryman, pilot, or in my case, a bandsman. We are all part of this grand strategy. That’s where I think IWP comes in.”

“It was one year after 9/11, and I was working as a US Army bandsman at the United States Army Band ‘Pershing’s Own’ in Washington, D.C.,” IWP alumnus Derrick Shaw said during an interview with IWP. “Things got very serious, and the Army Band was right in the middle of it. We had regular interaction with embassies and international events that were taking place throughout the National Capital Region.” Major Shaw recalled the assistance the band provided to President George W. Bush during the many visits from foreign dignitaries. “The band elements and I would be present to welcome foreign politicians on airport tarmacs, the White House grounds, and at traditional wreath-layings at the Tomb of the Unknown Soldier.”

As the daily dramas unfolded before him, then-Lieutenant Shaw sensed the influence his music had on the occasion. “If we found a way to connect on the musical or cultural level, it always seemed to have some sort of an impact. We were part of an atmosphere that our leaders were using to set up further interaction and communication.”

Having been a part of hosting some of the first officials elected in Iraq and Afghanistan, it became evident that the Army Band’s music was paving the way for negotiations that would affect the lives of American military personnel deployed overseas.

Major Shaw was born and raised in Atlanta, Georgia. Throughout his youth, he had two deep interests: music and military service. It wasn’t until his college years that he realized he would no longer be able to cultivate both. While enrolled in the University of Georgia, Derrick understood that he could either pursue a career in the military upon conclusion of his ROTC involvement, or he could continue his studies and follow a career in music. After much thought and consideration, Derrick chose the latter.

After earning an MA in Instrumental Conducting from the University of Wisconsin in Milwaukee, Derrick found himself teaching music at a local high school back in Georgia. “I enjoyed my work there, but I still had these nagging thoughts about the military,” he said. Even years after his pivotal decision, he still felt a call to service.

“I remember one year we had a few guys from the Army band come to the school and share about their work. It really stuck with me.” After a year of wrestling with an ambition to apply, Derrick resolved to do so. Soon thereafter, his application was accepted, and he had finally reconciled his two great passions.

“It was definitely a lifestyle shift… from being a high school band director to going through all the training to be a 2nd Lieutenant in the Army,” he recalled. The military discipline required to perform at ceremonies called for painstaking attention to minute details in uniform, formation, drill, and courtesy. Ultimately, these lessons served him well. It was during this time period that Major Shaw was stationed first in Fort McPherson, then with Pershing’s Own in Washington, D.C.

Upon reflection of those years of service, Major Shaw acknowledged that “I was able to see the significance of what I was doing, but at that time I wasn’t able to articulate it.” At the conclusion of this stage of his career, he naturally began to consider further graduate studies in a place where he could more closely examine the experience earned in his service.

“The Army was providing opportunities to study, and I took them up on it.” 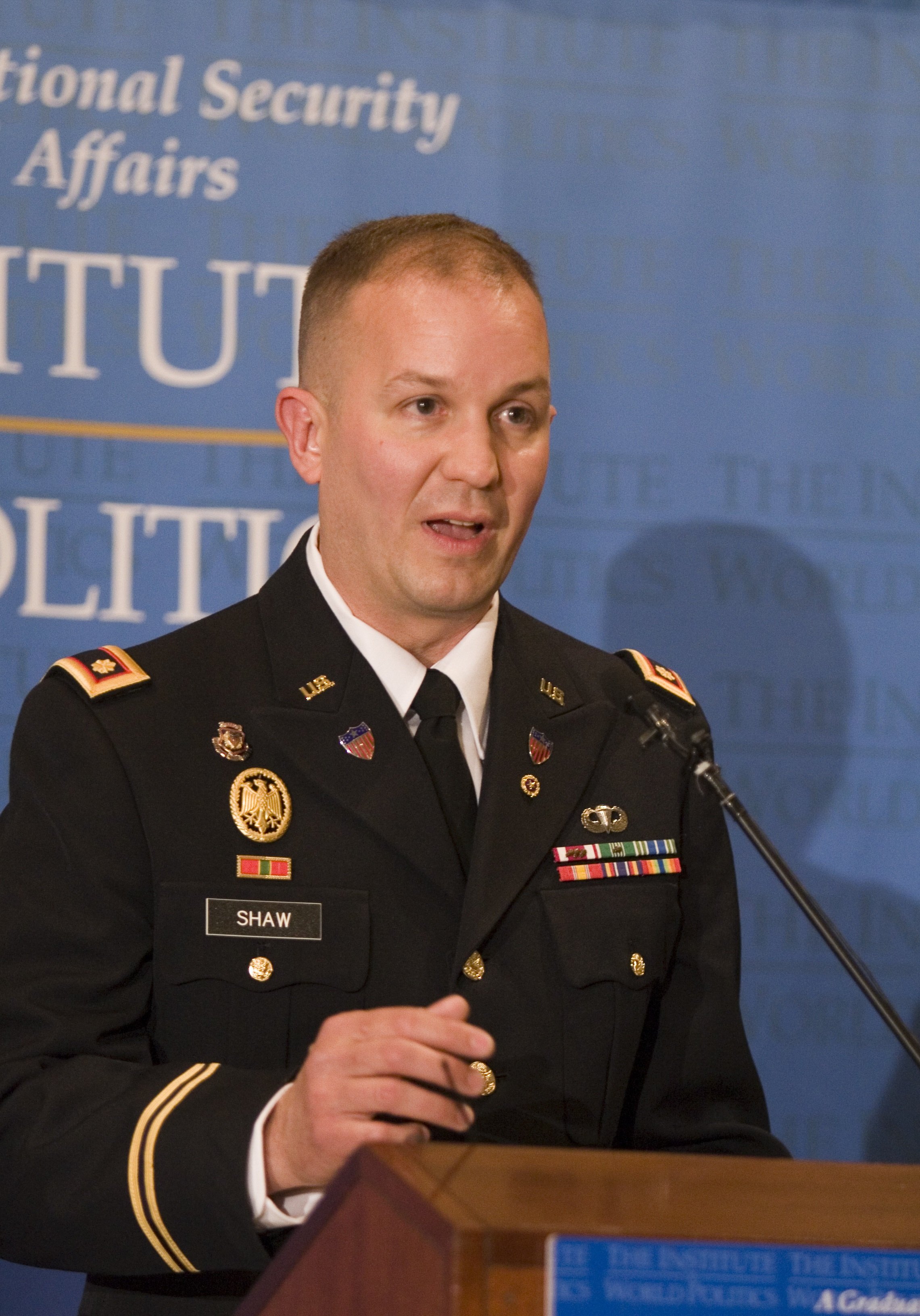 Studying Military Bands in the Context of Strategy

“There were about four schools that I had an interest in. Three of the schools I was drawn to due to their name, and the fourth school, IWP, intrigued me with its mission statement.”

Derrick decided to do further investigation. “I decided to attend an open house,” and Derrick and his wife made the drive to Washington, D.C. for the event. “While walking down the front stoop at the conclusion of the event, I knew I had found a place to study.”

The home-like atmosphere of the school, the small class sizes, the accessible faculty, the flexibility granted students in their research, and the unique curriculum all provided the atmosphere needed for Derrick to distill and communicate the lessons he learned with the Army so far. Eager to circulate his lessons amongst fellow military personnel, Derrick applied and got to work.

Before selecting his research projects, Major Shaw asked his fellow military personnel deployed abroad which topics would they find most helpful if studied. “I got a lot of interesting feedback,” he said. Thanks to this feedback and the support of his professors, he was able to choose paper topics that were truly relevant to his profession. One paper he wrote reviewed the effects an Army band can have in psychological operations (a.k.a. Military Information Support Operations). Another studied the utility of an Army band during nation building operations. “The professors were always there to help and offer constructive feedback. This liberty they granted in my research areas was essential to the fulfillment of my goals for my education,” he said.

“I enjoyed going to every single class when I was there. I got something from every single professor.” Derrick was fully immersed in what was for him a novel academic discipline. “I had a class with Professor John Tsagronis. He had practical exercises and focused on national security strategy, and the big documents that form the basis for strategic thinking and strategic direction within the country,” he said. “It forced me to question as a soldier-musician: how do I get my organization not only to help support that national strategy but also the soldier at the tactical level?” Derrick was discovering the significance of his role as it relates to the bigger picture. He was finding ways to communicate the raw thought fed by years of experience.

Practicing an Art of Statecraft

At the conclusion of his studies, Major Shaw was stationed in multiple locales. During his assignments at the United States Military Academy at West Point and his deployment to the Persian Gulf region, he again saw the significance and impact of his work when done well and in concert with his compatriots. On one specific occasion, an Army Division band Derrick was working with had been called upon to assist in the cooperation of American soldiers and those of the United Arab Emirates. He cleverly traded national anthems with the Emirati bandsmen. The tone was set and enhanced cooperation ensued. “I remember a high ranking officer from a subordinate command within CENTCOM approaching us with an electric expression and stating ‘this is a breakthrough, we haven’t been able to get this much dialogue going yet.'”

It was the same work he had been doing at his tour at the Pershing’s Own in Washington, only this time he had a fully formed understanding of his labor.

“I remember Dr. Lenczowski saying that you have to understand what people believe and why they believe it. What is it that makes up other people in the world, in terms of religion, cultural identity, history, etc. in order to engage with them? That was in class number one.”

Today, Major Shaw is stationed in Fort Hood, Texas with the 1st Cavalry Division Band. “The thing about Fort Hood is that the soldiers here are constantly deploying around the world on behalf of the U.S. This is one of those places in the Army where the rubber really meets the road.”

Major Shaw explained that even though there still are international components of his job at Fort Hood, the majority of his work deals with another set of events. “One of the greatest jobs that we do is having the opportunity to play for soldiers when they are going out onto the runway when they are preparing to deploy, and then when they are coming back, welcoming them home. That mission happens at all hours of the day and night, and it is worth every minute of it. It is a very powerful mission.”

Major Shaw also plays in local communities nearby Fort Hood. “It’s important that the American people are reminded of the great work the men and women of our armed forces continue to do. It’s also important that they are there and working on behalf of the American people.” This cultivation of esprit de corps lies at the heart of the efforts of the U.S. Military. Morale is a key element of a fighting force.

Major Shaw continues his service today and repeatedly asks himself that key question that makes him an effective member of a team. “I’m not the infantry soldier-warrior that is taking the field; however, what is it that happens across the echelons of strategy that ultimately leads to that individual soldier executing the task to take that hill? Where do I fit in, and how can I assist as a bandsman, wherever I am?”

Photos:
Top: Derrick Shaw conducting.
Second: Derrick Shaw at a collaboration in February 2013 between the Army Materiel Command Band and the UAE Armed Forces Army Band. This took place at Camp Redleg at Al Minhad Airbase in the UAE. The purpose of this engagement was to enhance mil-to-mil relationships between the US and UAE armies through these bands. The bands performed for each other and then together.
Third: Derrick Shaw gives the Valedictory address at IWP Commencement 2012.
Directly above: Maj. Derrick Shaw marching alongside the storied 1st Cavalry Divison Band. (U.S. Army photo taken by Staff Sgt. Benjamin Smith, 1st Cavalry Division Band)