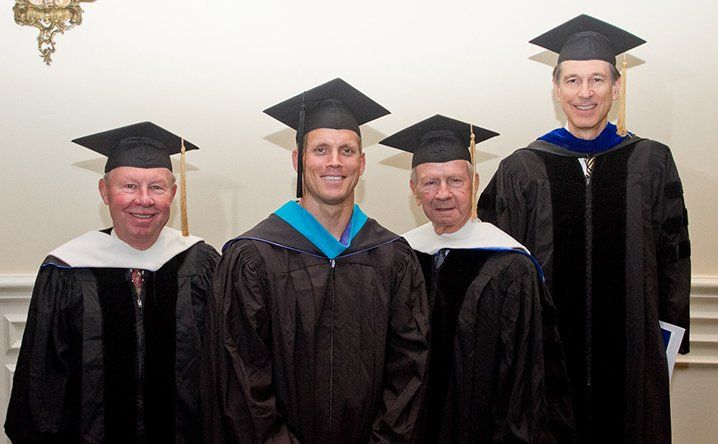 In this interview, we speak with Major Jeff Brewer, IWP Class of 2014. Major Brewer is an intelligence officer with the US Marine Corps.

How did you become interested in international affairs/national security?

My grandfather and his coterie of informed, well-spoken family and friends nurtured an interest in current events, domestic politics, and national security matters.  They had no great expertise except for the fact they were classic well-educated republican citizens who liked to debate the country’s direction and its leadership’s intentions and policies, here and abroad.  I sat at their feet in the late 1980s and early 1990s and learned more about what the Reagan and Bush administrations were doing right and wrong than I ever garnered from teachers in middle or high school.

As I looked towards college, I read more and more and began to think critically about foreign affairs and national security.  I recall that the Clinton administration’s interventions in the Balkans and in Africa and the associated critique/praise of these efforts piqued my interest in the question of what constitutes American vital interests and what makes it truly worth it to wage war.

What drove your decision to serve in the military?

Following 9-11, I spent hours drinking coffee with friends and debating into the wee hours of the night the country’s actions taken in Afghanistan and its move towards war with Iraq over WMD and violation of security council sanctions.  We were classic chicken hawks [supporting military action] and Monday morning quarterbacks.

At some point, I became aware of a U.S. Army reserve officer program and a friend’s decision to join a pipeline to become a Special Forces officer within three years of commissioning; he intended to do something and live a life without regrets.  I thought to myself, there is no reason why I should not endeavor to do much the same.

Becoming a Marine presented an opportunity to serve the country, remain physically active, and influence implementation of policy in some small way.

We collect, fuse, and convey critical intelligence to our leaders in order to drive Marine Expeditionary Unit operations.

Please tell us about your current work in the military.

I lead and manage a section of approximately 60 Marines tasked with supporting the MEU’s mission to be a force in readiness afloat.  We collect, fuse, and convey critical intelligence to our leaders in order to drive MEU operations while on deployment in various geographic combatant commanders’ areas of responsibility.  The MEU, Commanded by a Marine Colonel, is the smallest of what the Marine Corps calls a “Marine Air Ground Task Force.”  The MEU is comprised of about 2,200 Marines and Sailors, and its major elements are the Command Element (CE), the Ground Combat Element (GCE), the Aviation Combat Element (ACE), and the Logistics Combat Element (LCE). 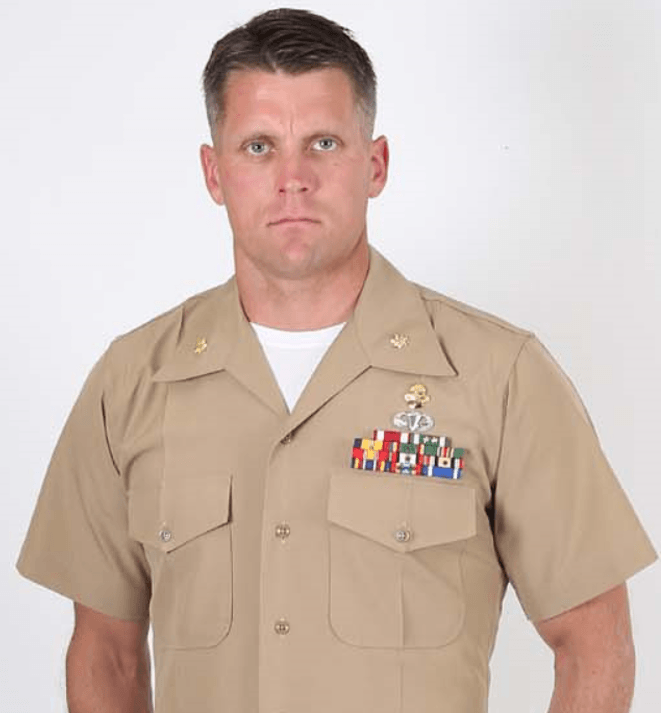 As cheesy as it sounds, the “scholar-practitioner” bit got my attention.  I consider myself a man of action, and IWP’s faculty was filled with people experienced in the very topics and matters about which they were lecturing.

I began graduate studies at IWP in 2002, but joined the Marine Corps two years later, taking a hiatus from my studies.

What was the most interesting thing you have learned at IWP? Did you take any classes that were particularly useful?

When I renewed my studies at IWP in fall 2012, I had at that point accumulated four deployments and six years worth of experience in the Fleet Marine Force/Operating Forces.  These experiences impressed upon me the importance of terrain, certainly at the tactical level of war, but also on the operational and strategic plains.

Dr. Streusand’s Geography and Strategy and General Jajko’s Military Strategy courses both provided an opportunity to explore the Marine Corps’ operational and even strategic role as force projector throughout the world and especially in the Pacific, and how our ability — with the Navy — to control or influence geographic features in the world’s commons is essential to American relevance in all regions.  Presence counts for everything.  If you are not there, do not expect to be relevant.

Dr. Streusand’s Geography and Strategy and General Jajko’s Military Strategy courses both provided an opportunity to explore the Marine Corps’ operational and even strategic role as force projector throughout the world.

Did studying at IWP change your thoughts about international affairs?

I certainly moved away from an idealistic approach to American use of power and influence towards a more realpolitik worldview regarding U.S. involvement in world affairs.

Did your studies at IWP impact how you approach your profession?

I have a more balanced approach to viewing the relevance of what we do in the Marine Corps.  I am better able to contextualize the “what” and “why” within the larger national strategic framework.

Without IWP’s influence, I would likely default to a slightly less sophisticated, more propagandized, Marine Corps-centric view of things, i.e., we do what we do because we can, rather than we are a strategic hedge against hostile actors and an enabler for U.S. forces postured around the globe.

What do you feel are the most impactful actions/decisions you have made so far in your career?

Determining to get orders to the Marine Corps’ intelligence training schoolhouse in Dam Neck in 2012, VA facilitated completion of my studies at IWP and it brought me into contact with the next generation of Marine Corps intelligence officers.  In this role, I trained young Marine infantry officers to become competent intelligence professionals able to serve anywhere in the Marine Corps’ Ground Combat Element.

I invested in my own and others’ education — in formal and informal ways — during my three years there, and that experience paid dividends for me at succeeding assignments in Quantico and now at Camp Pendleton.

Deploy with the 15th MEU and then take orders to a Geographic Combatant Command, whether joint intelligence operations centers for US Pacific Command (PACOM) or for US Central Command (CENTCOM).

What is a piece of advice you would give to IWP military students?

Five years after the publication of this article, we followed up with Jeff, who was promoted to the rank of Lieutenant Colonel in June of 2021.

Last time we caught up with you, you were in California at Camp Pendleton working for the Marines. What have you been up to since then?

We concluded our assignment in Camp Pendleton with the 15th Marine Expeditionary Unit (MEU) in the summer of 2018. The Marine Corps selected me to attend the School of Advanced Warfighting (SAW) from summer 2018 to 2019 at Marine Corps University at Marine Corps Base Quantico. After SAW graduation, we did a two-year tour in what the USMC would call a “payback” assignment (for the year of academics at SAW) at Marine Corps Forces Central Command (MARCENT).

I worked for LtGen Sam Mundy in the MARCENT G3 as a planner. In this role, I got a front row seat for Central Command’s execution of a military strategy to support the Trump Administration’s policy of Maximum Pressure vis-à-vis Iran. This was a fascinating experience watching the Marine component command support the combatant commander (USMC General Kenneth F. McKenzie) and his requests for additional forces to support deterrence against Iran, while simultaneously acknowledging and supporting the Marine Corps Commandant’s Force Design initiatives.  Those two purposes were less than congruous.

Following the payback tour at MARCENT, we moved to Okinawa, Japan to III Marine Expeditionary Force (MEF) Information Group (MIG) in the summer of 2021.  I currently serve as the III MIG Operations Officer and am responsible to develop, coordinate, and manage operations and activities conducted by III MIG, as a regimental-level 06 Colonel command working directly for the III MEF Commander a 3-star general officer.  We (III MIG) have a command element and five subordinate battalions; these commands span warfighting functions to include all-source intelligence, signals intelligence, communications, air/naval guns and all domain effects, and logistic/supply.

Our work at III MIG is focused decidedly on supporting III MEF’s implementation of Force Design and its role as a contributing stand/-in force for the INDOPACOM Combatant Commander.  Challenging China and contributing to integrated deterrence (mixing the Trump and Biden Administrations strategic terms) are the MIG’s priority efforts.

Where do you see your career going in the future?

I will conclude my assignment in Okinawa in the summer of 2024. I’ll get another look at 05 – level command this summer, 2022. If I do not get command, we will likely look for a final assignment back in the United States working as a planner or staff intelligence officer at a combatant command or Marine component command.

What is an IWP memory that still sticks with you today?

While a student a Marine Corps Command and Staff College at Marine Corps University, I came up to IWP for MIT Professor Dr. Barry R. Posen’s lecture on his book entitled Restraint: A New Foundation for U.S. Grand Strategy in September 2015.  At the time, the Marine Corps was looking at the end of counterinsurgency operations and starting to re-cast itself as the traditional amphibious force de jure global service but particularly in action in the Indo Pacific. That book and that lecture presented an alternate view of how best to preserve and utilize American naval power in the context of a proposed strategic reset (of sorts) and a re-thinking of our willingness to project power as often as we were at that point in time.

That book remains relevant for me in my current job here in Okinawa. 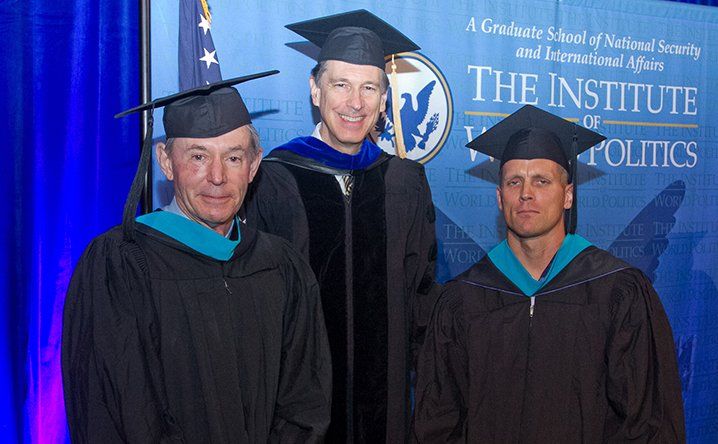