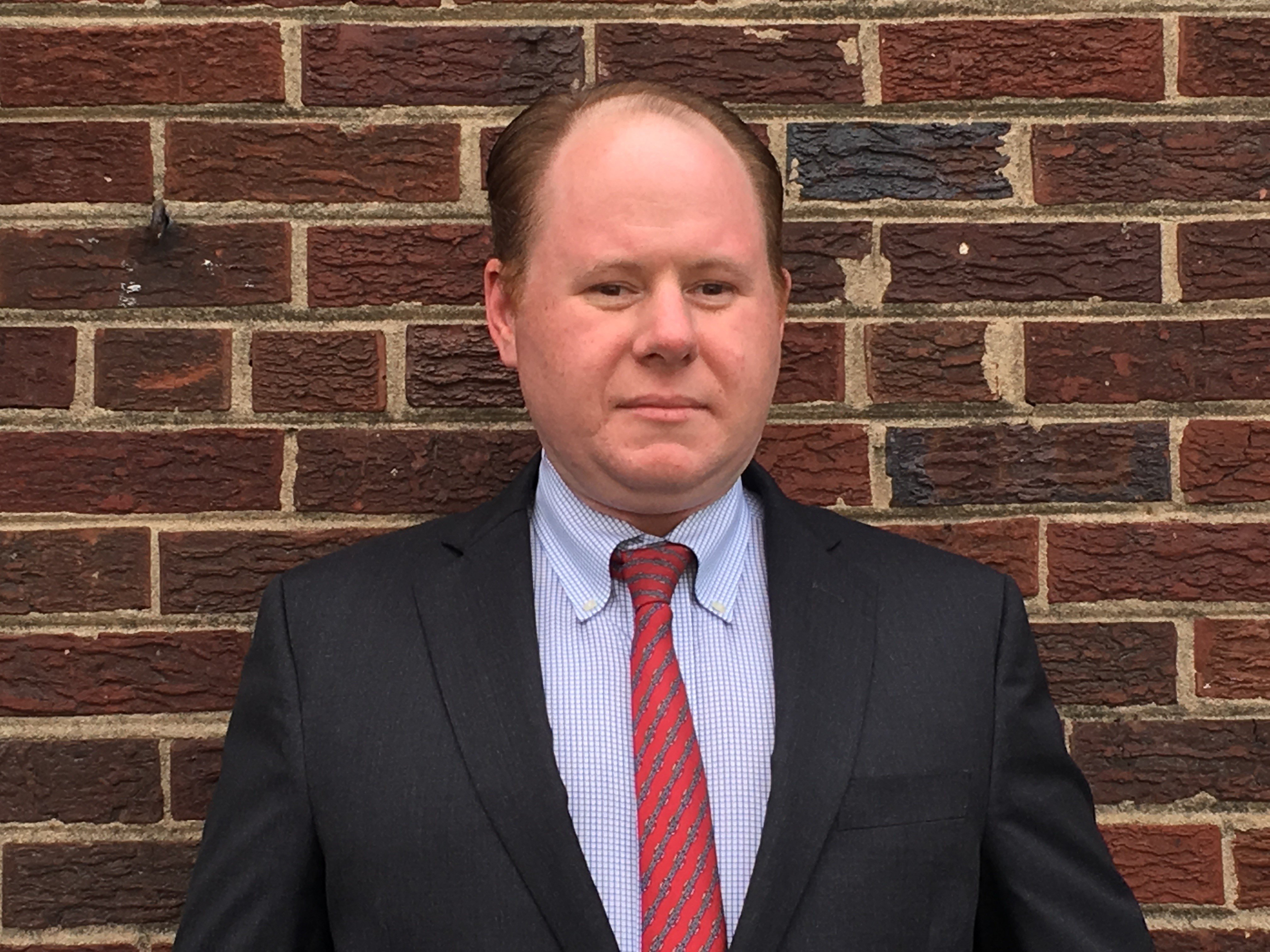 In this interview, we speak with Wilson Nash (’15), who is currently working with Capitol One in its Anti-Money Laundering department. Wilson used his IWP education to transition from a role in commercial banking to his current role, where he works to protect the financial sector from criminal and terrorist activity.

I grew up on a farm in Virginia. As for college, I graduated from the University of the South in Sewanee, TN with a BA in History. Afterwards, I had several jobs including as an aide in a Virginia gubernatorial campaign and as a private tutor to an American family in Kenya. Eventually I moved to Washington and I began working for a community bank in Virginia.

Please tell us a little about your work in banking before IWP.

I began as a bank teller, and when I left I was a Bank Officer. During that time, I was exposed to the various ways that money moved through the financial system. While at the bank, I had the ability to order large sums of cash, open and close accounts, issue cashier’s checks, and execute wires. These seemingly routine transactions and operations have the potential to expose any financial institution to various levels of risk. That is the part that I found interesting.

How did you become interested in security issues and intelligence?

Throughout my education, I’ve always had an interest in these issues. As an undergraduate, I took classes in Russian, German, and Ottoman history and political science classes covering the U.S. Presidency, intelligence, arms control, and the European Union. These classes were extraordinarily topical given that, during my four years in college, the 2000 election, September 11th, rapid EU and NATO expansion, and the invasions in Iraq were all in the news. It was hard not to follow these issues with so much happening in such a short period of time.

What was it like contemplating a career change? How did you make a final decision to make the leap?

The contemplating part certainly was not easy. I had a steady job with a clear career trajectory. That alone was a hard thing to walk away from. Couple that with almost ten years removed from undergrad (could I even still write a research paper?), and I was staring down a five semester, belt-tightening journey with no guarantee of success on the other end. I was gambling on myself.

Conversely, I also knew I needed something that interested me, kept me engaged, and helped better our nation. Living in D.C. provided that opportunity. We are surrounded by government, industry, and thinkers that guide our nation. I wanted a part of that action. As for making the leap, I knew this was my chance to make a difference, and I took it.

When I first moved to D.C. and began working at a bank, I knew I would probably need some type of graduate degree. I remember seeing an advertisement in the Washington Express for IWP. It was a missile that turned into a pencil. I figured that might be an interesting place, and tucked it away in the back of head. Finally, when I decided it was time to move along in my career, I attended a couple open houses, and liked what I heard about IWP’s purpose.

Through a mutual friend, I met IWP board member General Jack Nicholson during my application process. I hold him completely responsible for giving me the final push towards IWP, and for putting the bird in my ear to be “one of those guys who follows the money.” I never realized the importance of that advice until I had already finished my first semester at IWP. His help with IWP and his advice is what changed my career arch for the better.

What was the most interesting thing you learned at IWP? Did you write any papers or take any classes that you particularly enjoyed?

These are separate questions. The most interesting thing(s) I learned, and the reason someone chooses IWP, is the deep-dive and reinforcement of why we are fortunate to be Americans. Western Moral Tradition and American Founding Principles do a tremendous job laying down that bedrock on what makes the United States different and the responsibility we Americans have to uphold. I challenge anyone to listen to Amb. Piedra speak of his time in and escape from communist Cuba, and not believe that we have something special.

As for interesting papers, Dr. Lenczowski always told us that papers should be geared to a field of expertise or desired career to facilitate self-learning. Given my career in banking, this bit of advice was sometimes difficult to follow. I remember for Geography and Strategy, I had to get creative. I ended up writing a paper on how Switzerland, due to its position on the map, became the historical banking center of Europe.

Please tell us a little about your current work.

I work for Capital One in their Anti-Money Laundering department. Generally speaking, all U.S. financial institutions are required by law to know who and what their customers are doing (Know-Your-Customer), and to report any suspicious transactions to our consumers in government.

These activities cover a spectrum of potential bad activity (i.e. fraud, money-laundering, terrorist financing, human trafficking/smuggling). The reports (Suspicious Activity Reports) produced by financial institutions play a tremendous role in aiding law enforcement and intelligence agencies, and protecting the U.S. financial system. In my role, I vet those reports. Unfortunately, I have yet to run into Jennifer Garner or Samuel L. Jackson around the office.

What was the transition like to this new field? Was your prior experience in banking helpful?

The transition was not a difficult one. Having already worked at a bank before joining Capital One, I was exposed to AML. The big difference was combining my prior professional experience with what I learned at IWP.

Did you learn anything at IWP that you feel directly applies to your work today?

Looking back, the Epistemology class, while probably the most difficult for me, has paid dividends. In my current role, I am constantly challenging assumptions, biases, and decisions to ensure that quality, consistent, and accurate reports are completed. Oftentimes, I find myself kicking around hypotheses with co-workers and discovering new ways to view data.

Working in AML is a fascinating field, and I would like to further my career in it. I know I am making a difference every time I go into the office. What more could any IWP graduate want?

What is a piece of advice you would give to members of the IWP community interested in coming to IWP as part of a career change?

Finally, an easy question. My advice is to take full advantage of whatever IWP offers you. The classes are important (and interesting!), but there is such a wealth of networking opportunities and job finding resources available. Go to lectures and introduce yourself. Become a regular at the career office. Use Alumni Relations to find graduates that are in fields that interest you. Attend sessions on resume writing and mock interviews. We are all trying to better our nation and ourselves. That is difficult to do if you do not use ALL of IWP’s resources. 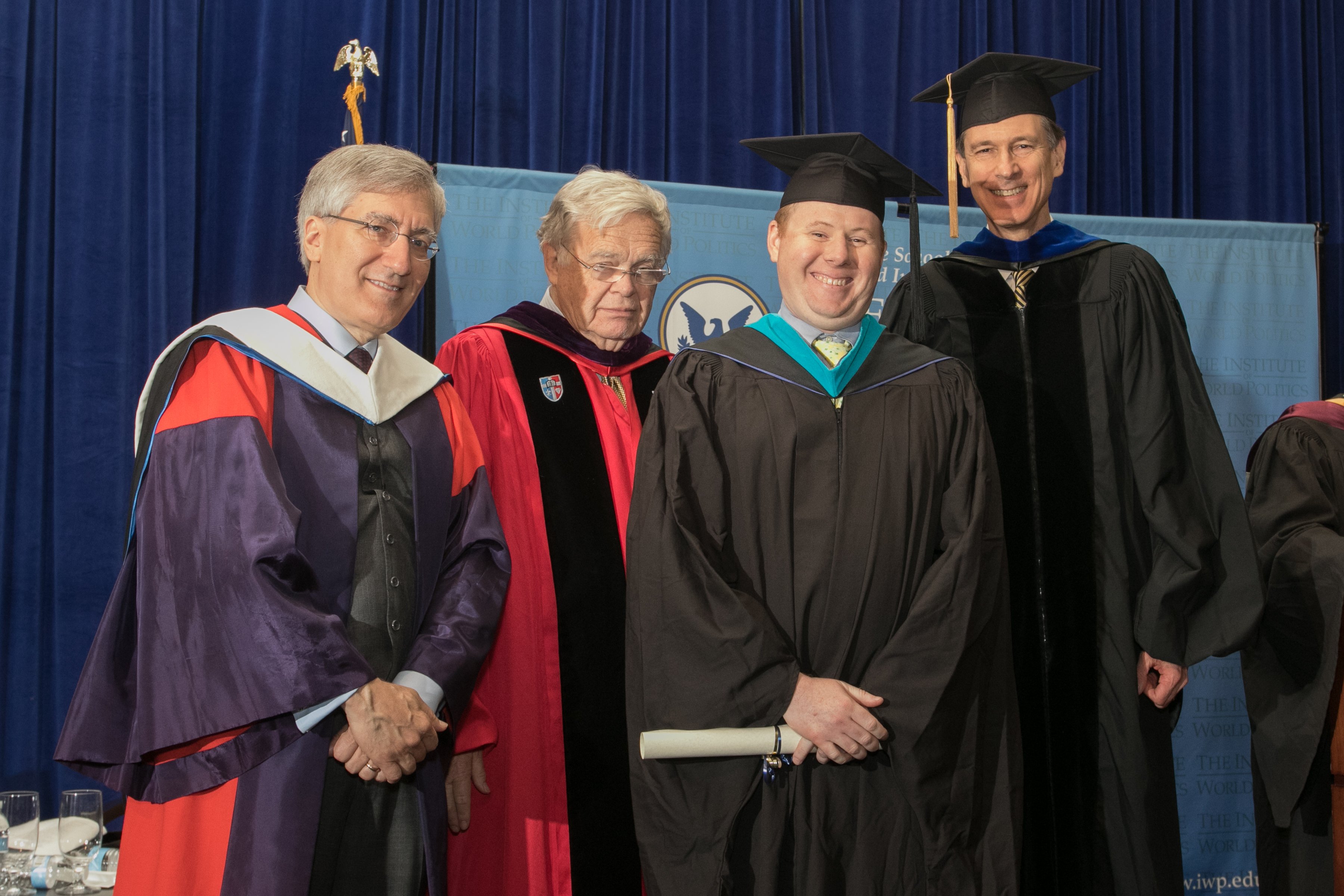 Above: Wilson Nash at Commencement in 2015.