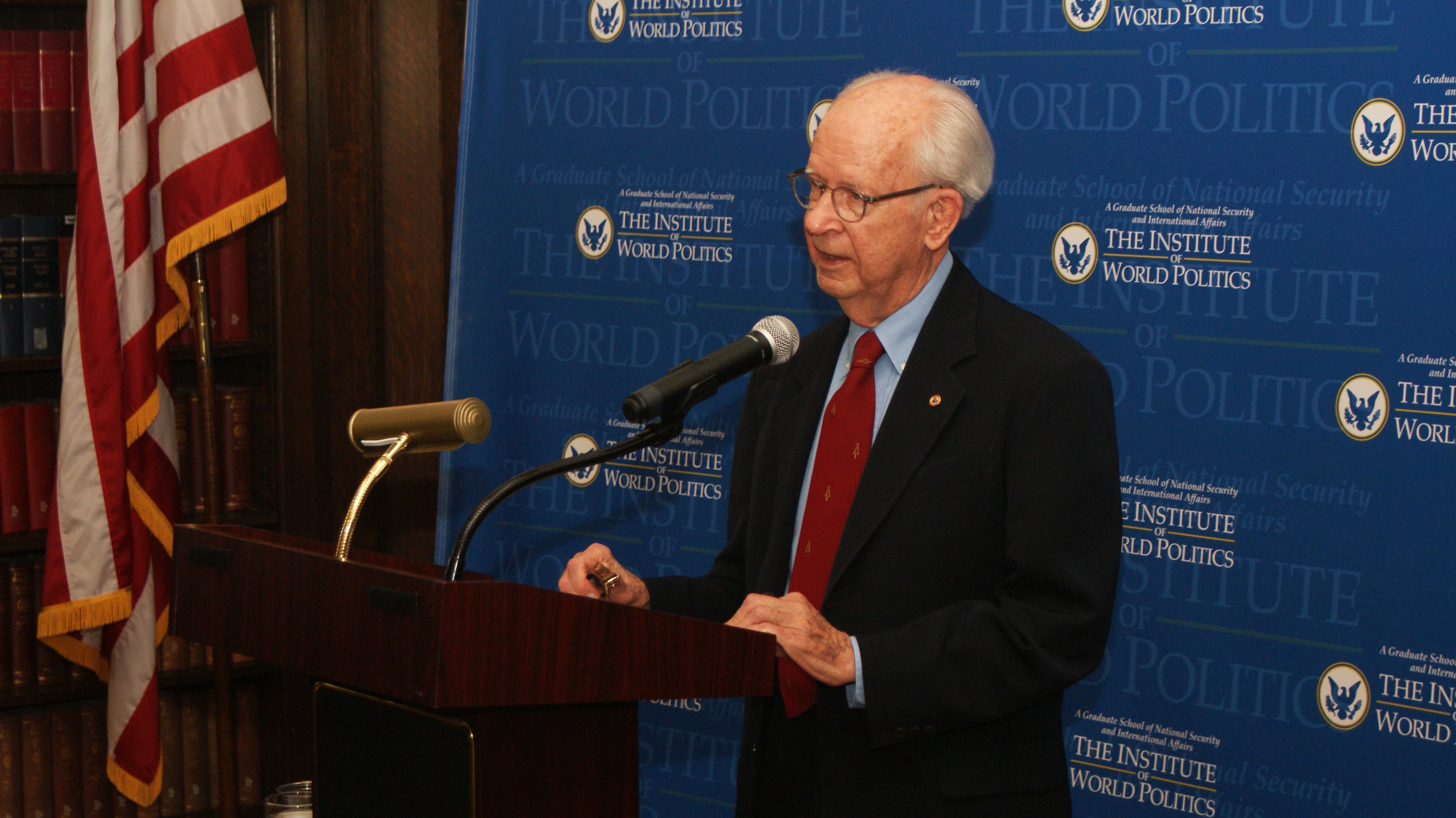 Above: Gene Poteat (’02) gave a talk on “The Changing Role of Intelligence in a Changing World” for the annual Brian Kelley Memorial Lecture at IWP in February 2017.

In this interview, we speak with Gene Poteat, a former CIA Scientific Intelligence Officer who received a Master’s degree as a part of IWP’s very first graduating class and went on to teach at the school for many years. He is now a Professor Emeritus at the Institute.

Could you tell us a little bit about how you got started at the CIA?

My first job after graduating from The Citadel in 1957 as an electrical engineer was at Bell Telephone Labs (BTL), first in New Jersey, then later transferred to Cape Canaveral, Florida, as a Missile Guidance Development Engineer. Our BTL guidance system, basically a mono-pulse radar, guided early American ICBMs and IRBMs.

We were in an arms race with the Soviet Union and so found our work both challenging and exciting. Were we ahead or behind in the nuclear arms race?

I met a couple of visiting engineers that worked at the CIA. From them, I learned there was more to intelligence than spying and stealing secrets; intelligence serves a number of other purposes, such as technology development to support other intelligence programs, support to treaty negotiations and monitoring, but, most interesting, the CIA keeps up with Russia’s missiles, as best they can, but we knew very little about the Russian missiles. I was intrigued.

So, when my boss informed me it was time for me to move on to a new job in a new location, I contacted those CIA engineers and asked about job possibilities. Fortunately, they seemed glad to hear from me, and I went to work with the CIA.

Above: Gene Poteat in 1953. Photo courtesy of the Association of Former Intelligence Officers.

My first day on the job turned out to be my worst, but ended as one of my best days in the CIA. On being introduced to my new boss, I slipped and fell into his desk, after which he made sure everyone knew I needed a chair with arms to help me stay on my feet.

On being introduced to the technical staff, I noticed they had drawn an intercepted signal on the blackboard and had been long trying to figure out what it was. “OK, hot shot Cape Canaveral engineer, what do you think this signal is?” they taunted.

I was stunned – the signal was exactly the same as our BTL signal that guides our antiaircraft missiles. Without acknowledging this, I went on to describe the signal and how it could guide Russian anti-aircraft missiles. As I left the room, I glanced back to see the analysts staring dumbfounded at the blackboard. Seems I solved their mystery signal problem. I was never again called ‘hot shot’ or offered a chair with arms.

I learned the hard truth that day: Russia had access to virtually all U.S. secrets and technology at that time, while we had virtually no access to theirs. The reason: CIA had no spies in Russia in those early days.

Above: Gene Poteat in the 1970s. Photo courtesy of the Association of Former Intelligence Officers.

Many people don’t realize intelligence is much more than spies and covert operations. Could you expand upon the role that engineering has played in U.S. intelligence since WWII?

President Eisenhower, from his WW-II experience, knew the value of aerial reconnaissance and the role scientific and technical talent played. He also recognized that getting spies into Russia would take years, if ever, to get answers to the Bomber and Missile Gap question.

He pulled together a group of America’s leading scientists, later known as the Land Panel, after the group’s leader, Dr. Edwin Land (inventor of the Polaroid instant photography camera), with specific orders to develop and operate aerial reconnaissance of Russia to get the answers. The Panel went further by also recommending the development of satellites to eventually replace the more vulnerable airplanes.

Surprisingly, Eisenhower ordered CIA to take on these projects, with Air Force support, since they needed to be carried out in secret. CIA’s Director, Allen Dulles, objected, saying the CIA was not in the high technology business. Eisenhower responded, “Well, you’re in that business now.”

The CIA would go on to became one of the world’s leading high-tech R&D establishments.

You worked on the U-2 class of aircraft, the precursor to the SR-71, and various space and naval reconnaissance systems during the Cold War. Could you speak to the strategic impact these systems had for the U.S.?

Above: The tree stump bug designed by a Division managed by Gene Poteat. It is on display at the Spy Museum.

Could you tell us about your time as Chief of the Ground Systems Division within the Directorate of Science & Technology (S&T)?

This Division managed the development and operation of SIGINT collection systems, some of which were emplaced sensors. One of these emplaced sensors was emplaced in Moscow, disguised as a tree stump. It was to collect Russian missile signals and, then, send the recorded signals back to Washington via an overhead U.S. satellite. The stump device worked well but was eventually discovered by the Soviets. They reversed engineered it then placed it in their KGB museum in Moscow. When the Soviet Union collapsed, Keith Melton, the world’s greatest collector of spy gadgets, most of which are displayed in the Spy Museum, went to Moscow and bought the device, brought it home, where a good replica was placed in the International Spy Museum, where it’s now on display. (I did not invent it; I managed the Division that did.)

Above: Gene Poteat at the CIA. Photo courtesy of the Association of Former Intelligence Officers.

What about the CIA and/or intelligence kept you in the agency for 30 years?

At the CIA, one sees and reads what’s really going on in the world, as opposed to hearing what the press and TV has to say. This gives an incredible, realistic view of the world. Further, one learns the impact of what intelligence can accomplish for the good of our nation, which never gets old, even after 30 years.

What drew you to come study at IWP and eventually teach here?

After retiring from CIA, I wanted to teach about the role S&T played in our national security. To do this, I felt I needed a graduate degree for the needed teaching credibility. I investigated most universities on the east coast to see what they offered. I was disappointed on their offerings.

Then, I came across a small ad in the Washington Post, about the size of a postage stamp, which listed 4 courses IWP taught. These were exactly what I felt I needed. So, I signed up for 2 of the courses that I had experience with, as a way to evaluate the courses.

They were excellent courses, so I continued to confidently take more courses. I ended up taking a total of about 17 IWP courses and eventually receiving the Master’s. I was in the very first IWP graduating class. There were only 4 of us.

Above: Gene Poteat at IWP Commencement in 2002.

What real-world lessons did you bring to class?

It seemed IWP was offering degrees that would help lead to a career in intelligence. As a former scientific intelligence officer I was able to connect with students interested in intel careers. I was able to assist, even recommend students in applying for jobs in the intel community.

What do you enjoy about working with IWP students?

IWP students were serious students, interested in national security, not just to collect a degree without goals.

What advice or takeaways do you have for the students who are following in your footsteps?

A career in the intelligence community is the most fascinating, interesting, addictive career possible.

What are some of the things your former students have gone on to do?

Many IWP students have gone on to important careers in the intel community. Sorry, but I cannot name names.

Above: Gene Poteat with fellow IWP alumni who also graduated from The Citadel at the 2018 Alumni Reunion.

Could you tell us about your acquaintance with Erik Goldstein of Boston University, who was instrumental in IWP’s early journey towards accreditation?

I developed a special interest in intelligence history after retiring from the CIA. I took several ‘vacations’ at Cambridge University in England to study British intelligence. One of the professors there was Erik Goldstein, an American expat. Erik and I became friends over time. I lost track of Erik when he returned to the U.S. During my early years as an IWP student, I learned their accreditation was provided by Boston University. When attending an IWP class, I was surprised to see Erik in the lobby. A bigger surprise to IWP folks was that I knew Erik, the source of IWP early accreditation. Small world indeed.

Could you tell us about your acquaintance with Don Bently, an early major supporter of IWP and the former owner of the campus?

Again, while an early IWP student, I wrote an article entitled ‘Engineering in the CIA’ for the journal of Tau Beta Pi, the Engineering Honor Society. The brief bio at the end of the article mentioned I was a student at IWP.  Turned out that Donald Bently, chairman of the board at IWP, also an engineer and Tau Beta Pi member, read the article and brought it to the attention of Dr. Lenczowski. Small world indeed.

In your opinion, what makes IWP unique as a graduate school?

IWP has the most qualified professors, most highly motivated students, and the greatest visiting speakers of any grad school.

What will students take away from an IWP education?

Clearly, they will enhance and improve America’s foreign policy and national security establishments.

Above: Gene Poteat receiving a Distinguished Alumnus Award at the 2018 Alumni Reunion. He is pictured with IWP Alumni Board President Michael Webber.