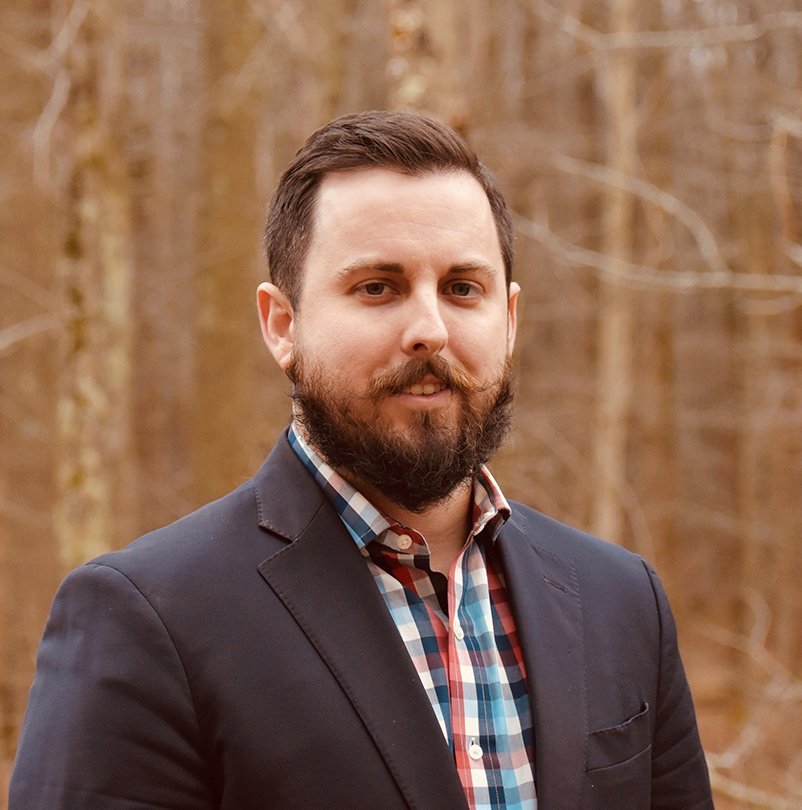 In this interview, we speak with Kevin Murphy (’16), whose career ambition is to continue process improvement with financing U.S. defense systems. He is working on this now a civilian supporting the U.S. Navy. Kevin shares how he tailored his studies at IWP to fit his interests and how one-on-one mentorship with IWP faculty members shaped his course of study.

Please tell us a little about your background in finance.

My career in finance included being an account auditor in Chicago, where I spent three years managing pension and health and welfare programs for central state funds, including Teamster Union International. In addition, I audited Fortune 500 companies around the U.S. and Canada. This experience allowed me to travel to different locations and do audits with a team of 3-6 people.

What drove your decision to attend IWP?

Before I moved to Washington, I lived in West Palm Beach, Florida, and my buddy and I, who were both auditors, started our own company doing water jet pack rentals. The company was Jupiter Jet Adventure, and we ran it for a few years.

When my friend decided he would go back and get his Ph.D., and we were going in different directions, I decided I would get my M.A. I was looking at going to either Kings College or the London School of Economics, both in London. I started dating my now-wife, then-girlfriend. She asked if there was anything closer. It just so happened that I came across IWP, and it was a simple streamlined application process. It matched my ideas/viewpoints and seemed like a good location in D.C., as the epicenter of U.S. global politics and economics.

I felt like it represented the values and ideas of what I wanted in a Master’s experience.

At the time, I wasn’t sure what I was going to study, and I wanted to do as much as I could in studying economics in relation to diplomacy. The path I chose seemed to be the freest in terms of organizing my own coursework, through professors like Dr. Glancy and Dr. Tierney. So, with their help, I forged my own research path. That was important to me in education — not to check boxes, but to dive deep into areas of interest that are important to me personally.

IWP is such a unique learning experience because the administrators and professors are so accessible. I went to Miami University in Ohio for my undergraduate studies, where there were about 18,000 students. If you wanted to change your curriculum, it was a long, drawn-out process. At IWP, they usually will allow as much freedom as you are willing to exert effort. If you are willing to push on a topic, you can research it.

IWP’s professors want to encourage you to find out what you want to do and push the bounds of what they can do to help get you there.

Did studying at IWP change your perception of international relations or specific issues you are interested in?

I did my “thematic sequence,” as they call it at Miami of Ohio, or dissertation for my undergraduate studies, on the rise and fall of the “Celtic Tiger” — the economic reforms in Ireland — and how it reshaped European economic policy. I graduated in 2011, and Ireland had not paid off its debt (tied to the U.S. housing market crisis). By 2014, they were the first European country to go into debt and pay it off fully.

So, I was able to bookend my college undergraduate study with what was currently taking place and how my assertions had changed by that point in time. It was a fascinating time to delve into the economic policy of the EU and how it is mirrored in the U.S.

One thing I didn’t initially consider before coming to IWP were the variables put out by U.S. government policy. The Institute has an emphasis on U.S. policy and the history of U.S. policy, so to add that knowledgebase expanded my viewpoint.

What was your best experience while you were a student at IWP?

That’s a tough question. I would say perhaps working in the library, because of the accessibility of professors and my time there, as well as the amount of research material, even in economics, available to students in the library.

At the time, we had a reciprocity agreement with the Georgetown University library, so we could use their materials as well. For me, the proximity access to research professors and materials via working there was a pivotal moment for me as a graduate student.

Besides that, Professor Glancy really helped me get in contact and be a part of some intriguing guest lectures. We had one who was a lobbyist for the Transatlantic Trade and Investment Partnership. That was something I couldn’t have done anywhere else in the country. To get firsthand knowledge from people who were directly trying to change policy was amazing.

Professor Tsagronis encouraged me to push the bounds of my research and analyze multiple facets of an issue, and this broadened my horizons.

Both professors profoundly influenced my education.

Did you write any papers or take any classes that you particularly enjoyed/were useful?

I did a paper on the transparency of bitcoin and other means of financing outside of federal systems. Outside of class, I talked to Professor Chodakiewicz and explained that I was really interested in cryptocurrencies, and he convinced me to research this topic for his class.

For the paper and research purposes, I purchased some bitcoin. This was in 2014, before the massive rise and bubble burst of bitcoin. Looking back on my assumptions with cryptocurrency is something that I really enjoyed with that paper. I wasn’t 100% right on everything, but watching the experience of something you research to come to fruition was neat.

Can you tell us a little about how you incorporated your interests into your papers/studies at IWP?

The nice thing with the proximity of the professors was that you can push the field of your study by asking them to make it acceptable for your coursework, but they also help you scope some things down to specifics.

IWP helps students to find the right balance in conducting research for their papers. That is important as well in higher education. You don’t want something too broad that is not important enough for anyone to read, whereas when you have a professor who works with you and small class sizes, it reinforces the fact that you are having a one-on-one experience with professors. They can read your first or second draft and give you actual feedback.

I have some first drafts from IWP that, by the second or third draft, you couldn’t even compare the papers because the topic had expanded or narrowed down in what I was examining.

Did your studies at IWP impact the trajectory of your career?

Not in the ways you would traditionally think it would. I went to IWP, studied what I wanted, experienced a lot, and through connections I met at IWP, I pivoted from being a student to being a full-time employee as a contractor supporting the federal government. From there, I was able to shape my own path as to what I wanted to do within the system.

I don’t know if I would ever have worked to support the federal government outside of IWP. I currently support the U.S. Navy. I would not even have considered myself knowledgeable as to job positions or the workings of the Department of Defense before IWP.

IWP as a whole pushed me to the career I have today. It can open new pathways, but it is about the connections and the choices you make there and afterward.

Did your studies impact how you approach your profession? How has IWP affected your work at Herren Associates?

My work focuses in financial process improvement and budgetary process. The discipline of my previous work in Chicago and West Palm Beach, combined with my intensive studying in graduate school, pushed me in a discipline as far as taking responsibility and staying on schedule.

IWP helped me recognize my goals and how to be disciplined and routine to achieve what I wanted.

I’m in the process of being onboarded as a permanent fixture in the U.S. Navy as a civilian. My future plan is to continue process improvement with financing U.S. defense systems in any way I can. That is my long-term career goal.

What advice would you give to new students at IWP?

Don’t go into graduate school if you are not open to new experiences and new ideas. If you go to a place like IWP with your mind shut off, or you just want a diploma, go pay for that somewhere else or online. A place like IWP provides the opportunity to work with people who have been in the field for years and who are passionate about their topic.

If you are always in a place that is comfortable or that reinforces your own beliefs, you may not learn much further.

Get out of your bubble and learn firsthand from people with real experience. 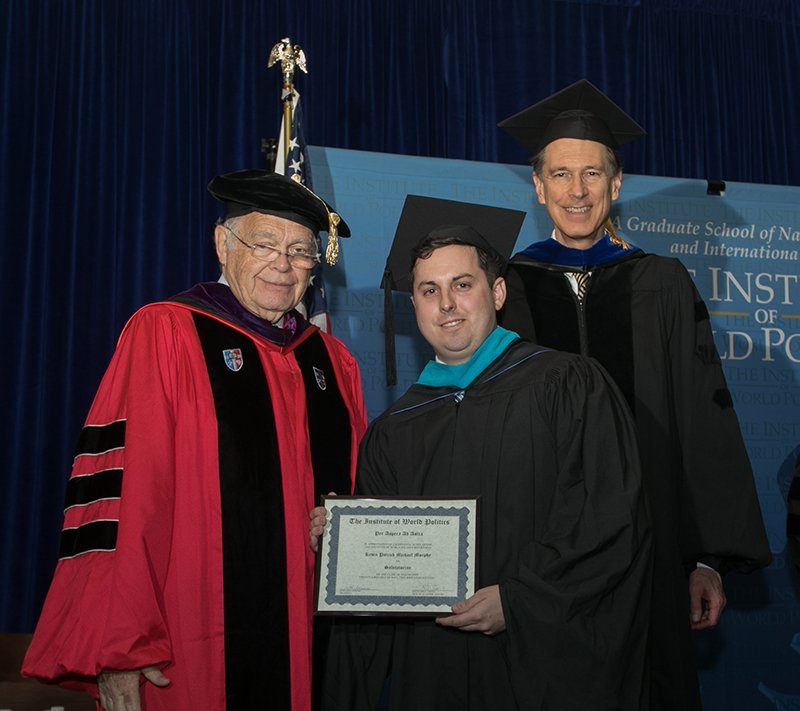 Above: Kevin Murphy being recognized as Salutatorian of the Class of 2016.