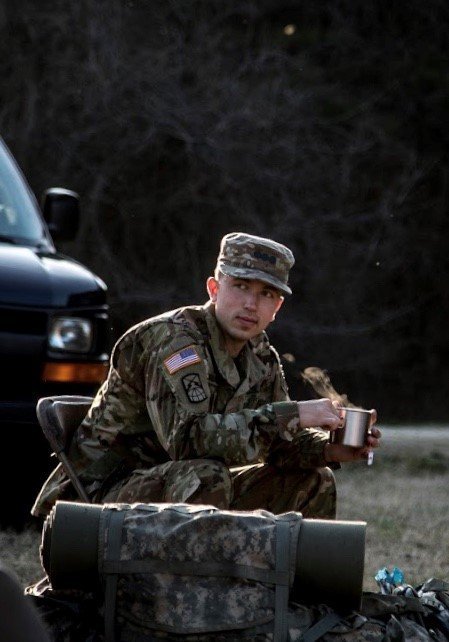 “When I found out about IWP from Peter Schramm, it was a question of when I would go instead of if.”

While Joshua Drusbacky was pursuing political science studies at Ashland University’s Ashbrook program, he was looking for a way to blend his military experience into a civilian career. He began to gravitate towards the national security field, and, soon, he learned about IWP from his political science professor Dr. Peter Schramm.

“I had an interest in national security and intelligence, and IWP is one of the few schools that focuses on this field,” remembered Joshua.

His Army experience helped Joshua narrow his career focus and area of interest to intelligence after he attended advanced technical intelligence training shortly after graduating college. This training included a practical portion where the soldiers did analyst work with local police.

Soon after this training, Joshua began studying at IWP, deepening his knowledge of intelligence and national security with professors who had done this work themselves. His favorite classes revolved around intelligence, including Prof. Quattrocki’s counterintelligence course and Prof. Sano’s human intelligence course.

Joshua’s time with the military did not end during graduate school. Instead, he joined the Georgetown ROTC program to achieve his goal of becoming an officer in the U.S. Army Reserve.

After his first year with the Hoya Battalion, Joshua went to Fort Knox for a capstone event for this program – advance camp – in which the cadets were tested on their leadership skills. The cadets led soldiers in military tactics, carrying out a raid, for instance, or planning an ambush.

During his second year with the Hoya Battalion, Joshua served in a leadership role, helping plan events for the Battalion.

“This program can be difficult for an MA student, because many of the projects are done on weekends,” commented Joshua. “Time management is a key skill.”

His professors at IWP were flexible and understanding. “They know that people work and understand military commitments. I would let them know in advance about my schedule, and we would find ways to work around it,” said Joshua. “A lot of times, professors and students at IWP also have a prior service background, so that understanding is already there.”

A civilian and military future

The day before IWP graduation, Joshua commissioned as a U.S. Army Officer, and he plans to go to training for the Reserves.

On the civilian side, after interning with the Criminal Investigations Division at the Metropolitan Police Department and working as a compliance analyst for the Department of the Treasury’s Office of Foreign Assets Control, Joshua is now serving as an analyst for a U.S. government contractor. He plans to continue to work in the intelligence community.

“The connections that we were able to build at IWP were very valuable, both from the perspective that the professors provide and the advice and connections that career director Derrick Dortch provides,” said Joshua. “The education here provides a foundation for anything that you could possibly want to do in intelligence, national security, or the diplomatic realm.”

When asked about the favorite part of his current work, Joshua said, “It’s the contribution that I’m able to give back to the U.S. The field I’m working in right now is on the front lines of keeping America safe, both in the Army and my civilian job.”