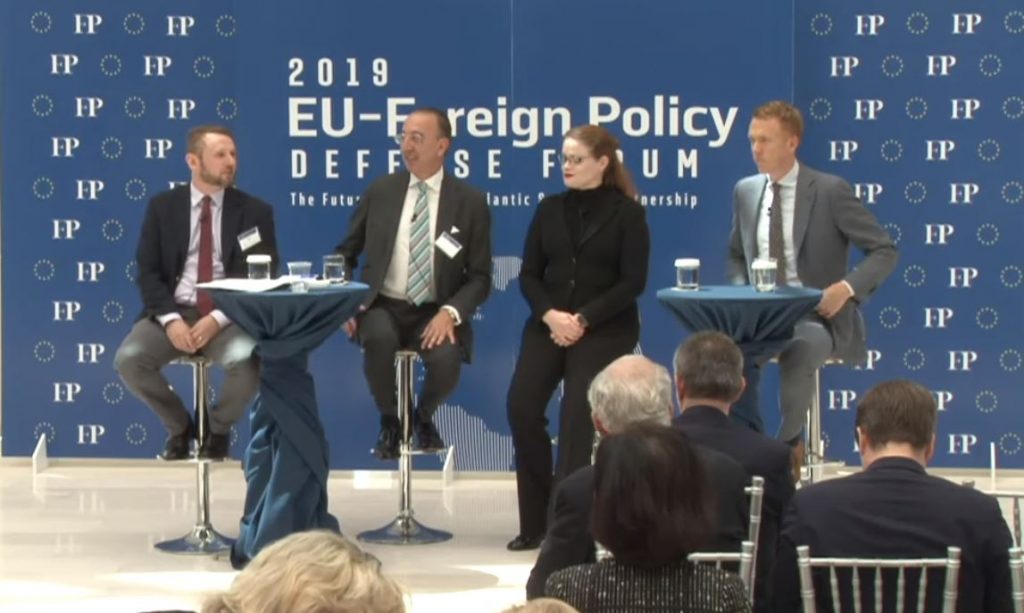 On June 6, 2019, IWP alumnus and current Policy Chief of the Joint Artificial Intelligence Center at the Pentagon, Mark Beall, moderated a panel discussing “Augmented Capabilities- Harnessing AI and Building Readiness for the Modern Battlespace” at the 2019 EU and Foreign Policy Defense Forum. Other panelists included Christian Brose, Head of Strategy at Anduril Industries, Jorge Domecq, Chief Executive of the European Defense Agency, and Tarah Wheeler, a Senior Fellow at the New America Foundation.

Topics of discussion for the 2019 forum surrounded the future of the transatlantic partnership and highlighted the importance of Europe’s defense on the 75th anniversary of D-Day.

Mark opened his discussion panel by highlighting the increasing convergence between artificial intelligence and international security. He stressed that “the national security relevant tasks that A.I. can perform has just exploded in the last five years.” He noted the rise in A.I. trends and began the panel by asking his colleagues for their assessments of these trends.Mark discussed the relation between ethics, values, and A.I. He called attention to the United States’ five pillars of military ethics and their consideration in the development of policy and implementation of A.I, specifically in the interest of defense. Concluding this topic, Mark discussed using previous frameworks to “build a cross-functional team…to implement this technology fully.”

The discussion then moved to the topic of lethal autonomous weapons, which Mark considers a future concern. He noted that the current issue involves “waging industrial scale information war against the like-minded democracies.” Mark believes in the need to establish a space for comprehensive discussion of A.I. technology. He also considers the tactical versus strategic operations of A.I. and how better to use the technology.

Discussion moved to the topic of understanding the fundamentals of A.I. Mark highlighted the need “to cultivate an A.I. ready workforce that knows not just what the technology can do, or how it might be employed, but what it can’t do and where the risks are.”

Mark opened the discussion to the audience, allowing questions. In this section of the panel, Mark highlighted a theme from the discussion: the relationship between government and civil responsibility in the development of the A.I. community. He noted that: “it is human and machine teaming, and you need both sides now in the digital era.”