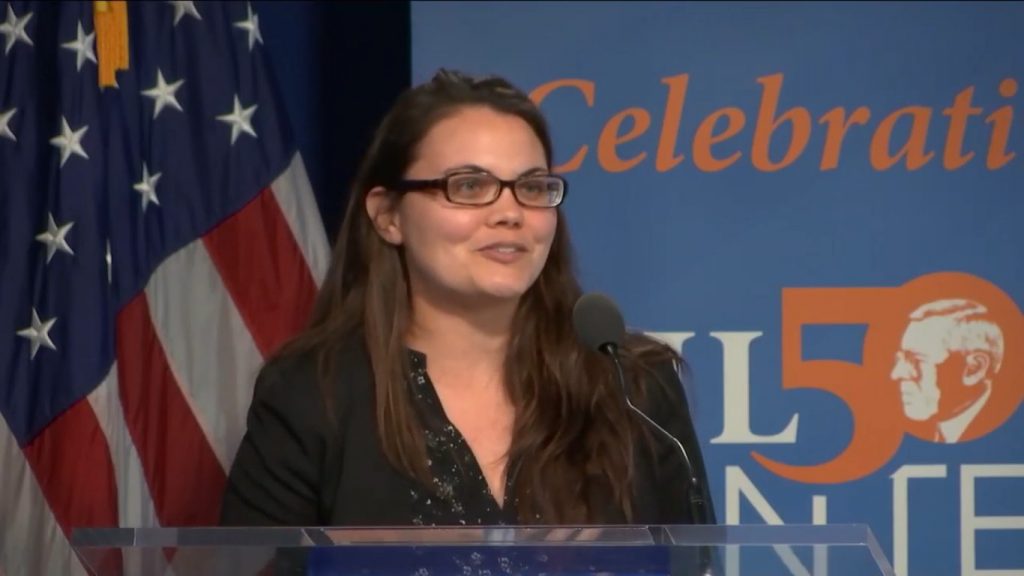 On May 29, IWP alumna and Assistant to the Director of Career Services Kelly Zug spoke at an event hosted by the Wilson Center, entitled “The Power of Personal: Women’s Leadership and International Exchange.” Kelly spoke about her experience in Bulgaria teaching English and volunteering at an orphanage through the Fulbright English Teaching Assistant (E.T.A.) Program.

Kelly joined an impressive panel of women who stand at the fore of women’s leadership and international education arenas. Marie Royce, Assistant Secretary of State for Educational and Cultural Affairs, was hosted by Jane Harman, President and CEO of the Wilson Center. Ms. Harman introduced Ms. Royce as “the muscle behind [America’s] soft power.”

Ms. Royce spoke, in detail, about the purview of the Bureau for Educational and Cultural Affairs. The Bureau oversees over 300,000 exchanges every year, including students and professionals to the United States and Americans going abroad. Royce also shared specific anecdotes brought to her by participants of programs like the Global Sports Mentoring Program, the Kennedy Lumber Exchange, Gilman Scholarships, and the Fortune Women Programs, before introducing Kelly and another former Fulbright participant.

Considering the current state of American foreign relations, and as many key positions in the State Department remain unfilled, Ms. Royce’s role as Assistant Secretary was highlighted as “even more important” to American diplomacy and soft power ambitions. Ms. Royce invoked the words of Secretary of State Mike Pompeo: “through exchanges, the person who is going somewhere else or who is coming to us is an ambassador.”

Kelly supported the words of Ms. Royce and Secretary Pompeo, sharing that “while working in Ukraine, I realized the marriage of necessity between cultural diplomacy and security, because understanding cultures allows us to foster alliances and international relations.” She continued, asserting that “security builds that necessary foundation for the longevity of trust and development initiatives in foreign policy.”

Ms. Zug emphasized the influence her time in Bulgaria had and continues to have, as the experience motivates her “to work in the field of international development and international education.” Kelly added that “though there is not a domestic service requirement for the Fulbright Program, I certainly try to remind myself daily that exchange is really a two-way street.” Zug shared that she keeps “a photo of [her] 9th Grade class right by [her] desk at work as a reminder” of the lessons and opportunities the program afforded her.

Ms. Harman commended Kelly on her words, closing the speaker portion of the event by noting that: “as people get to know each other, the world is much more safe.”

Watch the video About IWP