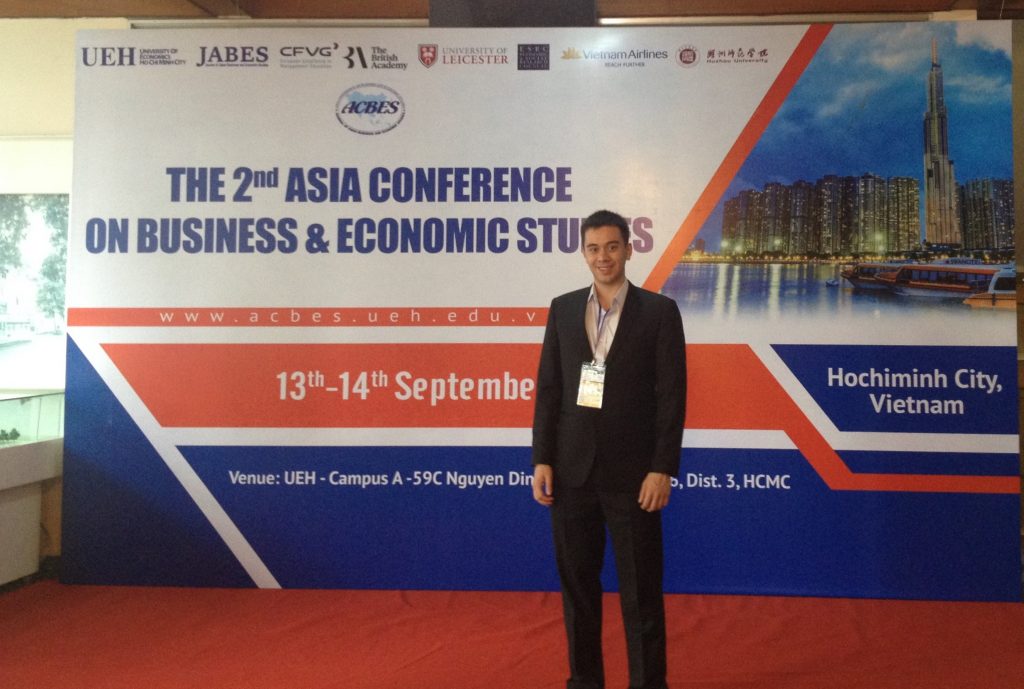 This past September, IWP student Ian Rohr presented on two articles at the Asia Conference on Business and Economic Studies (ACBES) at the University of Economics Ho Chi Minh City (UEH). Mr. Rohr is an alumnus of Tulane University, where he double majored in International Relations and Russian and minored in Economics. He is currently in the M.A. in Statecraft and International Affairs program at IWP. Additionally, Mr. Rohr previously interned at UEH in 2016 while he was an undergraduate student at Tulane University.

This is the second annual ACBES conference hosted by UEH, and it was attended by more than 150 academic professionals from over 27 different countries.  The event was sponsored by UEH in addition to other institutions and organized by the Journal of Asian Business and Economic Studies (JABES).  At the conference a variety of topics were discussed, with the focus being providing an efficient platform for economics to be discussed in Ho Chi Minh City.

Being an International Relations student with a focus on the Russian region, Mr. Rohr presented on U.S. and Russian economic and military influence in Vietnam as well as on Vietnam’s burgeoning technology sector and how it can help Vietnam achieve its economic goals. Ian observed that the current discussions surrounding Russia almost always focus on Syria or Ukraine; however, many fail to recognize the growing sphere of Russian influence in Southeast Asia as well. In his second discussion, Rohr focused on the technology sector—a subject he feels passionate about and believes will be extremely important in for the future of Vietnam.

Speaking about his time at IWP, Ian noted that the Institute is an extremely unique school that can provide a variety of opportunities. “All the professors I’ve had are very knowledgeable and are always willing to take time out of their busy schedules to help students if they put in the time and effort,” he commented.

Because of the flexibility of the IWP program, he has been able to further his career goals and participate in activities such as the ACBES conference. He has also enjoyed listening to the speakers who have visited IWP.

Rohr is one of the many IWP students and alumni who continue to make an extra effort to explore and affect the field of international relations.