The Estonian Ministry of Foreign Affairs awarded IWP M.A. candidate James A. Rice a certificate of appreciation for promoting understanding of Estonia in the U.S. in November 2018. This past December, the Ambassador of Estonia, Amb. Jonatan Vseviov, presented this award to James in person.

In his work as Legislative Director for Senator Chuck Grassley, James provides support on foreign affairs issues, including supporting Senator Grassley’s work as co-chair of the Senate Baltic Freedom Caucus. James works with all three Baltic embassies and the Baltic-American organizations on policies related to the Baltics and in co-hosting events on Capitol Hill that relate to the Baltics.

He comments: “Estonia in particular is also a longstanding personal interest of mine, as I find their resistance to communism and wholesale, successful embrace of free markets to be inspiring. I tell all my friends about all things Estonian, so my public diplomacy is both professional and personal.”

In fact, James’ work on Estonian issues came to the attention of the Estonian Embassy by word of mouth when he was working for Senator Grassley but before be began handling foreign affairs issues for him and before the Senator was co-chair of the Senate Baltic Freedom Caucus.

When asked about the impact of his IWP studies on his work with Estonian issues, James commented: “I certainly have appreciated the focus on the importance of integrating public diplomacy as one of the tools of statecraft.”

During his time at IWP, he has specifically researched Estonia’s nation-branding campaign and how this effort is tied into its national security strategy. He has also researched Estonian nationalism, the Estonian-Russian border treaty, the use of cultural intelligence to maximize the benefits of the U.S.-Estonian alliance, and the historical roots of Estonia’s military strategy.

Within the IWP community, James is not alone in his work on U.S.-Estonian relations. IWP Trustee Amb. Aldona Wos served as U.S. Ambassador to the Republic of Estonia from 2004-2006, IWP professor Paul Goble taught at the University of Tartu, and IWP alumnus Amb. Eerik Marmei served as Ambassador of Estonia to the U.S. from 2014-2017. 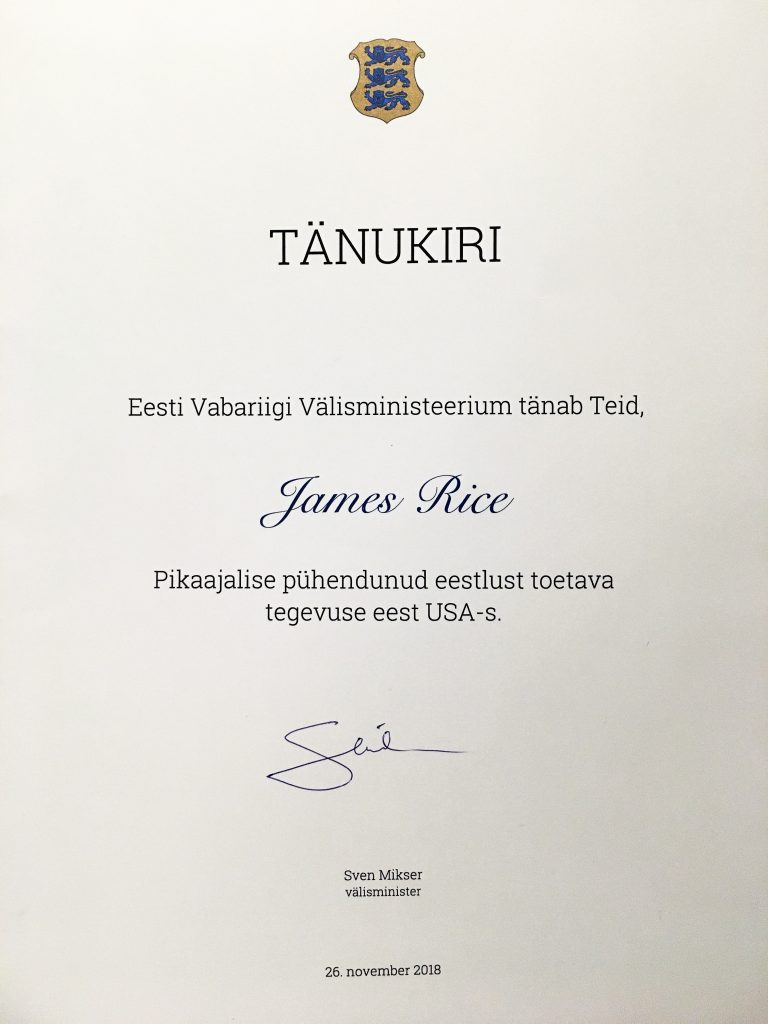