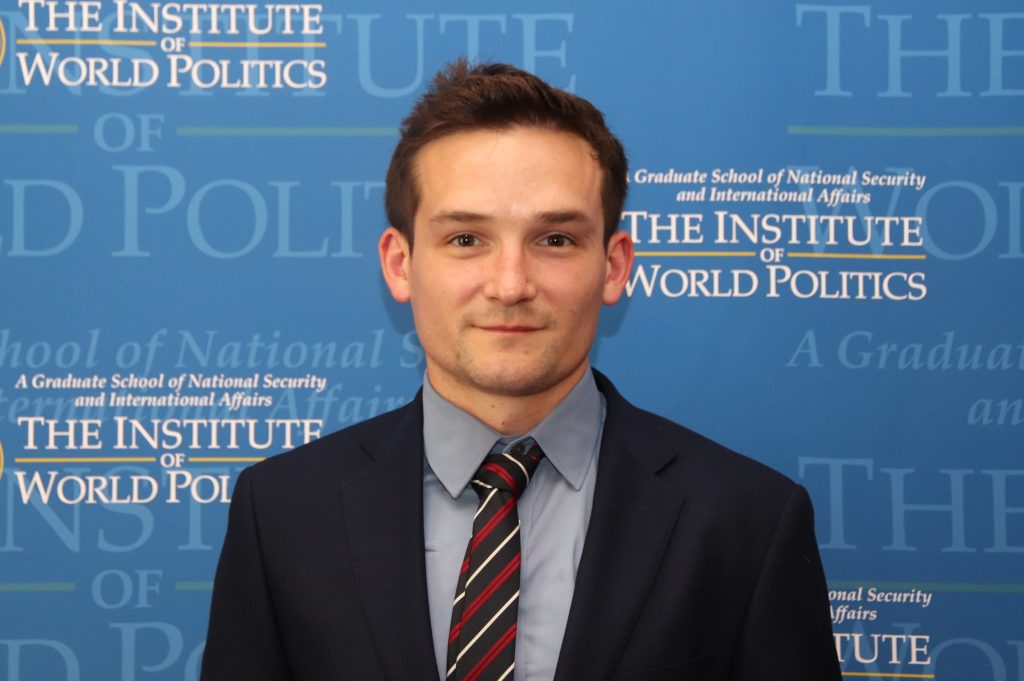 IWP student Alex Bergler has discovered that the arts of statecraft can be applied in local police work as well as in national security affairs. Alex and his team use skills such as diplomacy, intelligence, counterintelligence, cyber strategy, and hard power frequently while serving with the D.C. Metropolitan Police Department (MPD). In the evenings, he studies them with seasoned national security professionals at IWP.

This summer, Alex is planning to attend the MPD Academy to become a full officer. But this path was a surprise for Alex – he did not expect to enjoy police work so much or to be able to put into practice what he is learning at IWP so quickly.

An interest in history and national security

Originally from an island outside of Seattle, Alex was always interested in military history. “In third grade, my peers would want to play Narnia and Lord of the Rings. I would pretend that I was in Normandy,” he remembered. He would spend afternoons reading about the World Wars and the Vietnam War.

“My parents always encouraged my research,” said Alex. His father, a teacher, never shielded him from exposure to current events, and Alex remembers that during the Bosnian war, his father was interacting with a journalist on the ground there. 9/11 was also formative for Alex – “I remember it strongly. I understood that what happens internationally matters, but it also matters domestically. Security infrastructure is great, but if we can’t protect home, it doesn’t matter.”

Alex decided to move to D.C. after college, and, after looking at graduate schools in the area, found that “IWP seemed to check all the boxes.” In college, Alex had gotten more out of smaller seminar classes, and looked forward to IWP’s small class sizes.

When he arrived on campus and attended events like speed mentoring with IWP alumni, he said, “I planned to get an internship at the Pentagon or DIA – I fell in love with all of them. Ultimately, though, I wanted to do something that was intelligence-driven but also operational. I didn’t want to be stuck in an office.”

Trying out police work during an internship

The idea of doing an internship with MPD was first introduced to Alex at a career orientation with IWP career director Derrick Dortch.  Derrick mentioned that Alex could do an internship there with an intelligence unit, and Alex figured that he would try it for a few months.

Alex started as an intern with the Internal Affairs Division of MPD: “It was an awesome opportunity. The police officers are either detectives or sergeants, and they are some of the most experienced and highly competent people that you deal with at MPD.”

During his internship, Alex was encouraged to do “ride-alongs,” where he shadowed police officers in their work on the ground. He chose to do his first ride-along in one of D.C.’s more challenging environments. “I was hooked from there on. It incorporates everything that I was interested in doing,” said Alex. “Even as a patrol officer, you are practicing things that the military or CIA would do, but in a local environment. You are doing HUMINT [human intelligence] daily. Some of the best officers are people who go out and work sources. People trust them, and they build up a rapport.”

Alex went on about 45 more ride-alongs during his internship. On another of them, he encountered a Crime Suppression Team (CST), a unit that is tasked with intelligence-driven, proactive policing. The CST team took him to their office, where they were using all sorts of different intelligence tools, from remote cameras to interviews with confidential informants. One of the officers suggested he come back to work with them after his internship.

“From January until now, I have been working with the CST team,” Alex said. “It has been absolutely incredible.” On his first day, Alex was told that he would become somewhat of an ad hoc intelligence analyst for the unit.

Practicing and studying the arts of statecraft

He quickly found that his daytime work and evening classes had a “symbiotic relationship.” By day, he worked with the counterintelligence team and protected confidential informants. By night, he took classes about intelligence tradecraft and strategy. While he was taking Professor John Sano’s class on HUMINT, Alex remembers, “It felt almost funny… one day, we were doing an observation post somewhere, and in class the next day we were in class talking about HUMINT.”

Alex would then bring Professor Sano’s assigned readings to work to share them with the MPD team as they brainstormed ideas about the recruitment process and related topics.

Alex used other concepts learned at IWP in both his internship and his work with CST. He brought up the idea of “Red Cell” reporting, which is designed to bring a fresh perspective to a process, expose its vulnerabilities, and help a team avoid falling into complacency. His writing classes have also been instrumental, as he has learned to write efficiently for search warrants and other documents at MPD.

Alex finds that IWP’s integrated approach to the arts of statecraft is mirrored on a local level in police work: “As a police officer, you do all this on a daily basis – diplomacy, leveraging risk, lethal force, all while considering the localized environment and culture.” Since he is working in D.C., Alex’s office has an international dimension: they coordinate investigations with INTERPOL and speak with international law enforcement.

When asked about what experience represents his time at IWP thus far, Alex said, “It’s those small moments when you are in class with a great professor – Quattrocki, Tsagronis, Sano, Danis, and others – and maybe 4-5 other students, and you get on a tangent. I got into an interesting subdiscussion with Danis about what it was like to work with the Cubans in counternarcotics when he was in the Coast Guard. There are so many anecdotes that we hear in class. The Sano stories are iconic now.

“When I was in undergrad, I would try to find connections with people, and I would live for those moments in class when everyone wants to be there and is interested in the topic. Walking to class at IWP, we will have a 45-minute discussion or debate about something – that academic and intellectual shared spirit in everyone can be rare in an academic environment.”

This summer, Alex and Professor Tsagronis may do a directed study about law enforcement in a domestic environment and emerging technologies – a topic that directly overlaps with Alex’s work.

Looking to the future, Alex says, “I want to make sure I stay humble and stay ready to learn. After I graduate academy, I will be on a probationary period as a patrol officer. Later, I would love to get back into CST if possible, or maybe go federal after several years.”

During one of Alex’s recent patrols, a fellow officer was injured and is now in critical condition with a serious brain injury. A GoFundMe has been set up to assist him and his family, and you can donate here.