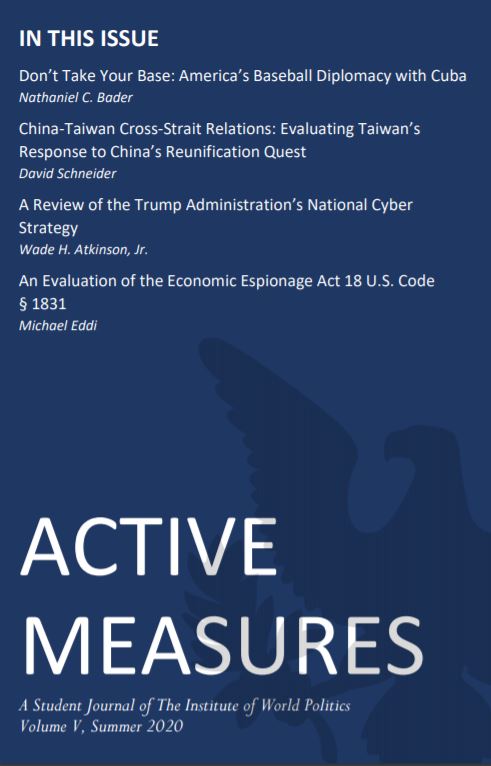 The fifth volume of Active Measures, a student-run journal, is now available online.

The name of the journal refers to a set of influence operations and propaganda – disinformation and deception – used by the Soviet Union to persuade and to have a strategic impact. The journal was founded in 2012 by a group of IWP students. Dean Acheson and Michael Webber served as its founding editors. The Editor-in-Chief for this edition was Geoffrey Seroka, and contributing editors were Jonathan Earles and Kelly Zug.

Don’t Take Your Base: How the Cancelation of the 2018 MLB-FCB Agreement Impacts Prospects for Normalized U.S.-Cuban Relations
Nathaniel C. Bader

Since the 1960s, Cold War tensions between the United States and Cuba have left ordinary Cubans as well as athletes as pawns in an ideological struggle. The common language of baseball has been used as a diplomatic wedge between the two nations. American government laws and corporate MLB policies, however, have created a system where Cuban players must defect from the island, often by working with human traffickers, to play baseball in the United States. The 2018 MLB-FCB deal that would have permitted Cuban ballplayers to play in America was canceled by the Trump administration before it could take effect. This cancelation has negatively affected prospects for normalized relations between the United States and Cuba. Read more

Reunification with Taiwan has been a top priority for Beijing since the founding of the People’s Republic of China (PRC). Recently, President Xi Jinping declared that China will not tolerate the separation of even one inch of its territory. To achieve this goal, Beijing has employed a variety of tactics from enticement to intimidation. This article will examine the shifting patterns of cross-Strait engagement and its impact on Taiwan’s stance towards China’s goal of reunification, focusing on two case studies. Read more

The Trump Administration’s National Cyber Strategy (NCS) was published in 2018 in a rapidly evolving threat environment due to the verification of increasingly sophisticated threats in cyber espionage, cyber physical attacks, and electoral manipulations. The NCS attempts to use a “whole of government” approach to Protect the Homeland, Promote American Prosperity, Preserve Peace Through Strength, and Advance American Influence (the “Four Pillars” of U.S. Cyber Strategy). At its core, the National Cyber Strategy seeks to use a renewal of the historic American Public-Private Partnership, which evolved from the post-World War II Defense Industrial Base to all forms of U.S. cyber security via real-time, comprehensive, and well-protected information-sharing among all critical U.S. entities about threat/defense/response actions. Read more

This paper seeks to examine the technicalities that limit the Economic Espionage Act (EEA) and offer policy recommendations for enhancing its practicality and bolstering its usefulness as a tool to fight economic espionage found to be committed against the United States. The ideas presented in this essay come at a crucial time when forward thinking regarding the issue of how best to tackle and prosecute the known attempts at stealing U.S. trade secrets continues to puzzle Intelligence Community officials and lawmakers alike. Read more

Past editions can be accessed here.