“The ISIS Crisis wargame simulated many of the stressors that existed during my time working in the humanitarian sector in Iraq. I worked in a post-conflict environment the year after Mosul was liberated from the terrorist organization. ISIS Crisis accurately demonstrates the difficulty of navigating power dynamics between state and non-state actors and reinforces the ongoing reality that actions often carry unintended consequences in a complex operating environment.”
– IWP student “Jane,” Team USA

On an early December Saturday, ten students in Professor Aaron Danis’ Violent Non-State Actors in the Contemporary Security Environment course (IWP 683), joined by another of Prof. Danis’ students and four IWP undergraduate interns, played the first virtual iteration of a wargame about the summer 2014 crisis when ISIS forces broke out of Syria and overran a sizeable chunk of northern Iraq, to include the major Iraqi city of Mosul.  Unlike the previous three times this wargame was played in class, this one had to be played out over Zoom.

“It took some indispensable help from the professional wargame team at the U.S. Army War College, but we were able to get the essence of the game into an online format,” said Prof. Danis (see photo below). 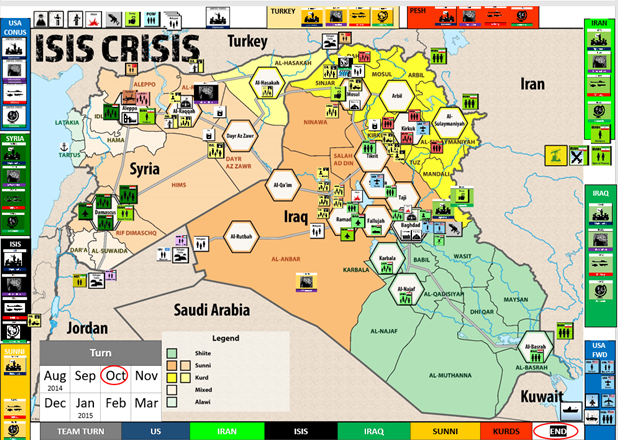 In a typical game, students and interns represent one of six teams: three state actors (the United States, Iraq, and Iran) and three non-state actors (ISIS, the Kurds, and the Sunni tribes of Iraq).  Each team develops a strategy using the tools of statecraft prior to the game that they then apply against live opponents who are either working with or against them.  “The strategies are graded based on content and how well the teams implement them,” said Prof. Danis.

Each game turn represents 2-4 weeks of real time, so a full 6-turn game will cover the 6 crucial months when the United States, Iraq, and its new Coalition allies tried to stem the ISIS tide before the group could take Baghdad.

“Each of the four games I have run has played out differently, which is the beauty of gaming,” said Prof. Danis.  “No two games are ever identical.” The course will run again in the Fall of 2021.

“To learn about how state actors and non-state actors operate is one thing, but playing as one of those actors is entirely different. ISIS Crisis offers a unique experience of learning, having fun, and understanding the stress-levels of decision making on the fly.”

In mid-November, current IWP student Semaj McDowell, IWP alumni Brooke Kuminski and Randall Judt, and former IWP intern Trai Gozzi (currently in Quantico for U.S. Marine Corps officer training), all took part in the International Crisis War Game hosted by the Hoover Institution at Stanford University, which partnered with the U.S. Naval War College and the Georgetown University Wargaming Society.  The three-hour game provided insights into the relationship between new technologies, domestic politics, conventional military capabilities, and nuclear threats.  Dozens of players from across the U.S., and some internationally, participated.

Prof. Danis, who was an observer in this game, stated that “you do not need to have any prior wargaming experience or subject matter expertise to participate, just a willingness to play a role and learn.”  Prof. Danis had played in an earlier running of the game back in May and asked that the more recent call for players be sent out to IWP students and alumni alike.

“It was an interesting experience to be able to participate in a wargame scenario that forced me to construct a comprehensive strategy when confronted by a high-intensity situation between two countries nearly identical in statecraft strength and stature,” stated Semaj McDowell after the game ended.

Brooke Kuminski added: “It was interesting to work with people from all around the country and the world. While there were different views on how to approach national sovereignty and invasions as well as the nuclear threat, I was impressed by how much everyone (at least in my group) wanted to avoid a nuclear option in our conflict.”

Randall Judt probably summed up everyone’s feelings best when he added, “I found this war game to be a welcome diversion from the pandemic. It was good to get away from the realities of pandemic life for a few hours, even if the topics that we discussed today were far from light-fare.”

Prof. Danis will continue to forward wargaming opportunities out to students and alums (so read your IWP e-mails)!