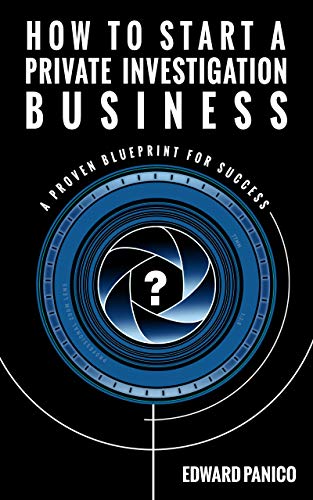 IWP student Edward Panico recently wrote a book entitled How to Start a Private Investigation Business: A Proven Blueprint for Success, which was released in January.

Edward is the founder of Lynx Security Group, a private investigation, security consulting, and training company, and he has worked both domestically and abroad in intelligence, investigations, and security matters with the U.S. Military and with the U.S. Department of State for over 16 years.  He commented, “When I got out of active duty with the military, I was thinking I should go the entrepreneurship route and apply my skills from the military and intelligence community to help people. The big question was whether I could do it.”

Edward was able to do it, and he has spent much of his time helping others who want to serve their communities by starting similar businesses. He has taught private investigators at all experience levels and has mentored those who are starting their own private investigation companies.

His new book aims to continue his work helping other entrepreneurs in this area. The book “shows you a way into the world of private investigation, the types of investigations to target, employee and independent contractor management, finding and dealing with clients, some common misconceptions in the field, and all the nuts and bolts of starting your investigation business.”

Edward was inspired to write the book because he believes that, as he has studied in his Western civilization class with Dr. Wood, in our current system, “If you help your fellow man, you in turn will be helped.”

He commented, “It is always good when you close a private investigations case or security consulting job, and you helped someone and made a profit. It is good to help the other person out.” Quite a few of his cases have focused on child custody situations or have helped people get closure. “There was recently a cyberbullying incident we were able to bring to a close,” he said. Another case involved an individual who had children with another woman who ended up getting custody of their children despite being an unfit parent. “He was able to win custody over a 7-year court battle with evidence we were able to provide for the case to show she was not being a good parent,” said Edward.

Since beginning Lynx, Edward has taken a job with the U.S. State Department and maintains Lynx in the interim until he can do it full time again one day. He also serves with the U.S. Army Reserves. In his State Department and U.S. military work, he has trained hundreds of personnel in security and counterintelligence, and he maintains an active security clearance. He has received the Military Intelligence Corps Association Knowlton Award and over 30 U.S. Department of Defense and U.S. Department of State service awards.

When asked what motivated him to enroll in IWP’s M.A. in Statecraft and International Affairs, Edward responded, “I always thought it was prudent to understand things from not only the Intelligence Community side, but also the international world. In my research, I discovered IWP and thought this is the institution to continue my education. I believe education is a lifelong process.”

His studies at IWP have been helpful so far, “especially on the security consulting side of things.” Edward’s classes have helped him gain a better understanding of cultures in different countries, and he often has people reach out to his private investigations business internationally. For instance, he previously had a request from Kenya for work in South Korea and Costa Rica. The IWP classes have “played well into the State Department side of things as well,” said Edward.

When asked whether he has any secrets for juggling a career at the State Department, his work in the Army Reserves, and his PI business, while also writing a book, to say nothing of studying at IWP, he said, “My wife would tell me I’m crazy. My day starts at 4:30 in the morning and ends at 10:30 or 11:00 at night. I work 7 days a week. I have to scale it back!”

Purchase the book on Amazon