“As a Sendero Luminoso player, I felt that any move I made had a cost. Either I lost combatants, or I gained territorial control over the Peruvian government. Overall, I feel like strategy is key to terrorism operations, and any move you make is either your salvation or your defeat.”
– Frederic Taly, insurgent player

From 1980-1995, the group terrorized the country and killed 20,000 people.  “This group killed more people than ISIS, and Peru needed international assistance to fight back,” according to Professor Danis.  The purpose of this wargame is to look at the economic impacts of counterterrorism on strategy development and implementation.  “In that era, the Peruvian economy struggled to balance spending between the security services to fight the insurgency and keeping the insurgency from attacking the nation’s critical infrastructure, which accelerated the country’s economic downward spiral,” said Danis.

Students combined their wargaming experience with class readings and other materials to write a short counterterrorism lessons-learned memo for a notional U.S. policymaker.  Student Caleb Sloane played the Peruvian government, and students David Route and Frederic Taly led the insurgents as they tried to build strength to challenge the security services.  While it takes a long time to play the full game, the players were able to play enough in one class session to get a feel for the challenges that both sides face.

“I found myself having to consider the motivations and strategy of the opponent before committing my own forces. This was an excellent way to understand the importance of balancing the ends, ways, and means of a national strategy,” said Sloane.

According to classmate David Route, “The game was effective in understanding specific operational level campaigns that Sendero ran to gain support for its cause. Also, being able to see firsthand how the government allocated its means to respond to the attacks proved beneficial to understanding the dynamics of the People’s War in Peru.”

At the end of three tense turns (about 3-6 months of real time), the government hung on to control the capital of Lima, part of the coastline south of the city, and some of the jungle highlands where coca trafficking eventually developed later in the 1980s (see photo below).  Shining Path, after a surprisingly fast start, had to stop and take stock while controlling one agricultural and one coastal region where it could levy “revolutionary war taxes” from the local populace.  “It would be great to run this for an entire day to see how it plays out.  Perhaps next year,” said Professor Danis. 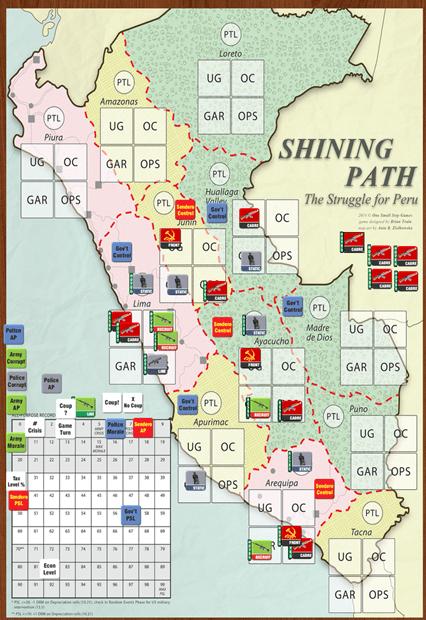 Course on Counterterrorism and the Democracies