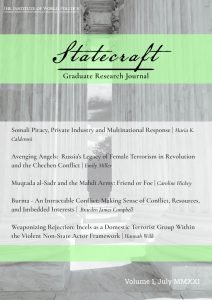 IWP’s student journal, Statecraft, has been released. It contains articles on subjects such as Somali piracy, female terrorism in Russia, the Sadrist Movement in Iraq, conflict in Burma, and incels as an emerging domestic terrorist threat.

This is the first edition of Statecraft. IWP’s other student journal, Active Measures, was first published in 2012, and there are plans to produce an Active Measures journal during the 2021-22 school year.