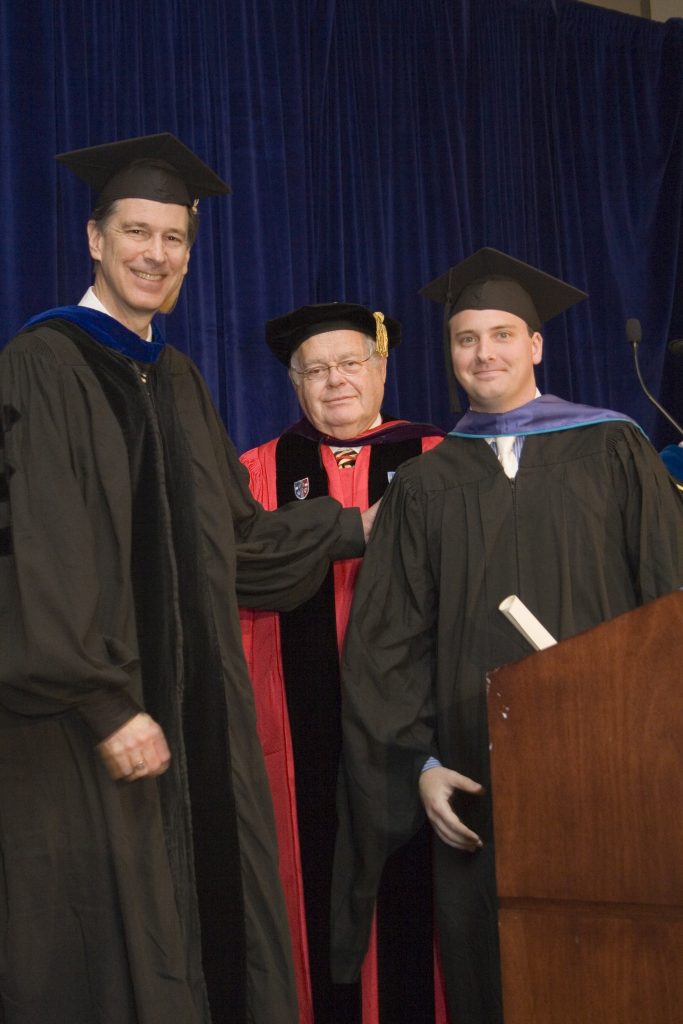 Stephen Dreikorn (’11) grew up in rural Western Michigan, with few people to ask about how to become a diplomat. He used IWP as a launchpad to begin a career as a Foreign Service Officer focused on public diplomacy at the State Department, where he has now been serving for 10 years and has earned nine Department of State Meritorious Honor Awards. Below is his story.

Ever since he could remember, Stephen had been interested in diplomacy.

“In high school, my teacher asked me what we would want to see on a visit to D.C.,” he remembered. “I said I wanted to see all the embassies on Embassy Row.”

During his undergraduate studies at Ashland University – a new partner school of IWP – Stephen began to look at graduate programs in Washington, D.C. so that he could be competitive for a State Department job. One of his classmates mentioned The Institute of World Politics and its program focused on public diplomacy and political warfare.

In addition to IWP’s emphasis on public diplomacy – a topic in which Stephen was very interested – Stephen said, “What sold me on IWP was that the professors were practitioners. I really wanted my academic experience to be useful in a practical way. The IWP professors had served in the Foreign Service, National Security Council, as Generals, etc.”

On his first day of class at IWP, Stephen knew that he had chosen a school with real practitioners. It was the day after President Obama was inaugurated in January 2009, and Prof. Tsagronis sat down and told the class that, until yesterday, he had been working for the National Security Council (NSC) for the last four years. Yesterday, he had been wrapping up at the NSC and helping with the transition to a new administration.

“This is exactly why I came to this school,” said Stephen. “There were professors who had served in the last six or seven administrations, so you got a balanced view.”

Looking back on his IWP experience from where he is now in his career, Stephen commented of the late Amb. Thomas Melady’s course on The Art of Diplomacy, “The stories he would tell and the way he had us think about diplomacy as an art form is so true to how diplomacy is conducted. At the end of the day, there is no scientific way to do it. It is very much an art form. It was interesting to have him share his experience from his three ambassadorships.”

First, although Stephen had begun a career in public relations and communications, he was able to leverage his experience at IWP to take an internship at the State Department. He said: “I left my career and took an unpaid internship, while I was in graduate school. It was crazy and stressful, but I wanted to see if I could make this my career or not. Through IWP as my graduate school, I was able to be competitive for a State Department internship.”

Second, Stephen found his classes helpful while he was working as an intern at State: “It was impressive to me how many different topics came up during my internship that we were talking about in graduate school. What I was learning from the practitioners at school were the right kind of things I needed in my toolkit for this career.”

Third, Stephen said, “Getting a degree from IWP focused on public diplomacy was incredibly helpful during my oral assessment for the Foreign Service. They asked me a lot of questions about my graduate school and why I picked it. I explained I wanted to make myself competitive, and I found this program where I could learn public diplomacy from practitioners.” Stephen’s interviewers were able to see that he was serious about working in public diplomacy, that he understood its many aspects, and that the topics he was studying were relevant to his field.

What I was learning from the practitioners at school were the right kind of things I needed in my toolkit for this career.

Working with the Foreign Service

Stephen’s Foreign Service career has already brought him around the globe. He served as a consular officer at the U.S. Consulate General in Tijuana, Mexico (2012-2014). There, he managed the world’s busiest arrests portfolio and created a public-private partnership with a U.S. fine arts NGO and a Mexican environmental NGO during a 4-month detail to the Public Affairs Section.

From 2017-19, he served as a Stabilization Advisor in the Bureau of Conflict and Stabilization Operations, where he oversaw the day-to-day activities and client interactions for a $1.7 million program in Venezuela, and he led contingency and security planning for Venezuela at the working level. In that role, Stephen deployed frequently to the U.S. Southern Command.

Since August 2020, he has been working as the Director of Public Diplomacy and Spokesperson at the U.S. Embassy in Niamey, Niger (known internally as the Public Affairs Officer).

A focus on public diplomacy

Throughout all these adventures, Stephen’s IWP education has been helpful: “It really gave me a solid foundation of the different elements of public diplomacy that exist, from things as simple as cultural exchanges to more of the serious harder power tools that are available from a strategic communications perspective.”

Before IWP, Stephen knew about the media component of public diplomacy, but at IWP, he learned that “there is so much more to it… Getting that foundation set was amazing. I think it makes a difference.”

As the Public Affairs Officer at the U.S. Embassy in Niamey, Stephen oversees all the aspects of public diplomacy, including all of the embassy’s press, media, digital media, strategic content, operations, public engagement, and cultural activities. When the embassy is fully staffed, Stephen oversees a team of twelve, including two other Americans and ten local staff.

In his current role, Stephen works on security challenges – including extremism, human trafficking, and drug smuggling – as well as development and diplomacy. In the span of a week, he may be staffing the Ambassador when he delivers remarks at a ceremony for development projects, drafting statements condemning terrorist attacks on civilians in the countryside, attending a Department of Defense humanitarian event, meeting with high school students who are interested in studying in the U.S., meeting with exchange program participants, making a video to cheer on the national soccer team, and speaking on a radio show about the new embassy building, all while managing the digital media platforms to reflect current events.

Internally, Stephen coordinates with other U.S. agencies, works on priorities from D.C., and prepares for high-level visitors. In August, Under Secretary for Political Affairs Victoria Nuland visited Niger, and Stephen staffed her for all her press engagements. Then in October, U.S. Ambassador to the United Nations, Linda Thomas Greenfield, visited Niamey where she addressed the press on multiple occasions as well delivered a speech on the importance of a free press at a local University.

The State Department identified Stephen as someone who did an exceptional job preparing his staff for this transition. He was one of a few people asked to present at a virtual panel about how to manage this transformation process with the local staff. This presentation was shared with other Public Affairs Officers.

Stephen’s work in transforming the public diplomacy system at the U.S. Embassy in Niger will have an impact for quite a while – until the United States’ next public diplomacy reset, which could be decades from now.

Stephen’s time at IWP had an impact on his effectiveness in explaining the public diplomacy transformation to his staff. For instance, thanks to his IWP classes, he was able to explain not only the Smith-Mundt Act, but its origins and the reasons that it exists. He explained the ways to weave the different public diplomacy tools to form a coherent strategy. Thanks to Stephen’s work, the embassy staff is excited about and ready for the new system.

Continuing a career in the Foreign Service

Stephen’s favorite part of working in the Foreign Service is that “the type of people I interact with in my job are the most interesting people we engage with in the Service. The general public is your audience, and it gives you a lot of latitude for creativity.” Stephen first looks at the embassy’s policy objectives, which audience within the general public needs to be targeted, and then how to reach them.

He said, “We interact with everyone from professional athletes to high school students to video producers to NGOs to the community of people with disabilities, and more.”

Stephen plans to work in the Foreign Service for as long as he considers it to be enjoyable or until he has to retire. Until then, he plans to try to focus his career on Africa and Europe, although this could change based on which positions are open when he concludes his work in Niger.

The general public is your audience, and it gives you a lot of latitude for creativity.

When asked what advice he could share with current IWP students who are interested in the Foreign Service, Stephen said that they should take the Foreign Service test. It is free and offered a few times per year. Once you take it, it takes on average about 18 months to go through the whole application/hiring process. In addition, it generally takes at least two tries to get through the process. If you fail the test, all you lose is a few hours on a Saturday.

Stephen also encouraged students to do a State Department internship if they can. Other internships that could open students up to this field include such organizations as the National Democratic Institute, the International Republican Institute, or the National Endowment for Democracy.

At these internships, Stephen advised, students should talk with as many current or former Foreign Service Officers and civil servants as they can to learn about their work, challenges, etc. “It is not a career for everyone,” said Stephen. “You live in a way that is very unusual, and you need to understand how that life looks.”