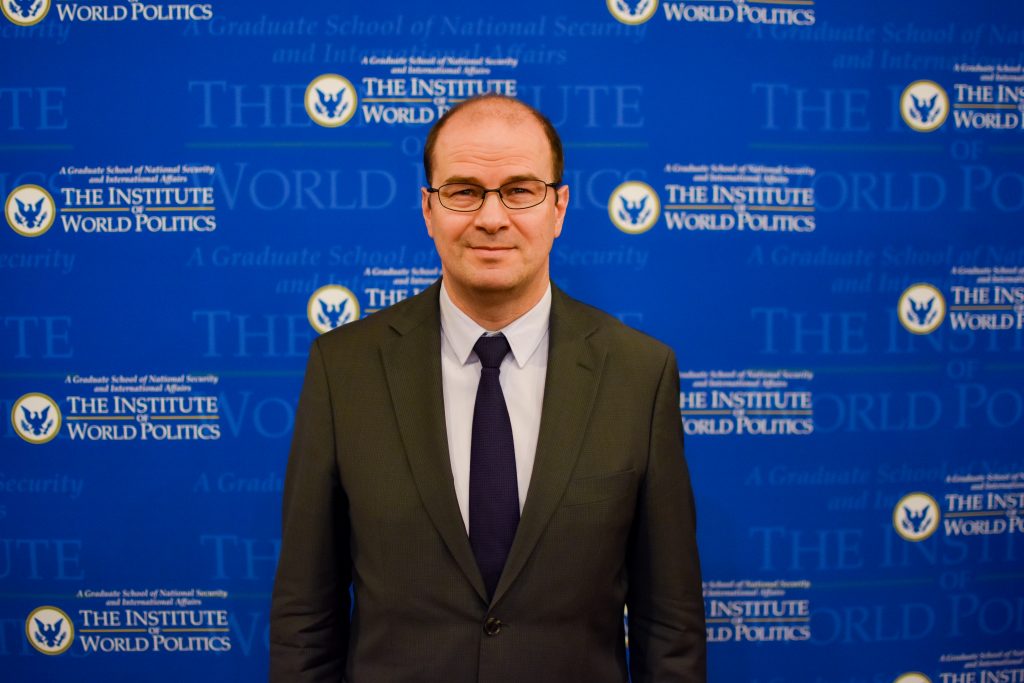 IWP launched the Doctor of Statecraft and National Security (DSNS) program in January 2018, largely in response to interest from the alumni community. Geared towards national security professionals, this degree avoids extreme specialization in favor of a broad-gauged understanding of the integrated use of the instruments of national power to achieve the ends of policy.

One of the first doctoral candidates

Nathan entered the doctoral program a year after its launch, in January 2019. At the time, he was working in a leadership role with the Joint Chiefs of Staff.

Nathan was formerly an Air Force officer followed by six years in U.S. Africa Command in Stuttgart, Germany before being assigned to Washington, D.C. He has also had assignments to the UK, Germany, Saudi Arabia, Qatar, and with the Iraq Survey Group.

He learned of IWP from a colleague at the Pentagon, Chris Kay, who had just completed the Executive Master’s degree program at IWP and also teaches one of our cyber seminars.

Nathan had always been interested in earning a doctorate, and he was intrigued by Chris’ description of the professors and classes at IWP, as well as the small size of the school and flexibility of the program.

After speaking with Danielle Shover in the recruitment office, as well as Dr. Marek Chodakiewicz, Dr. Joseph Wood, and Dr. David Thomas, he decided that it would be a good fit.

Small classes and a close-knit community

During his time at IWP, Nathan was able to take advantage of evening classes so that he could juggle his day job with his academics.

He was also able to do 3-4 directed studies during his program. He said: “The small size of the school means that you get a lot more personal care. I know all the staff. If I have an issue with registration, I call Iman and talk to her. Bigger schools are less personal.”

Indeed, Nathan felt like the IWP community was “like family.” He has been regularly mentoring students who are new to the national security community, including informally after class and formally at four different mentoring sessions for students.

Nathan has gotten to see the results of his mentoring. One day when he was walking around his agency, a young woman came up and said, “Oh hi Nathan, I’m so-and-so from IWP… You did the mentoring session for us.” Because of Nathan’s mentoring, this student knew what to discuss in the interview with the agency in question and had been working there for a year. Moments later, another young woman came up and said the same thing!

Others of Nathan’s mentees have obtained clearances and entered the national security community through work with government contractors.

Nathan completed the DSNS program in two years and eight months, and this time was intense. A lifelong oil painter, he did not pick up a paintbrush during the duration of the program. Academics became the complete focus of his off-duty time from work.

To manage his doctoral studies along with his full-time career, Nathan would do many of his readings during the break between semesters. He would begin papers on the day they were assigned. He would do his utmost to get all the reading done; it often meant his wife would bring him espressos in the middle of the night. “One professor assigned 950 pages in one week!” said Nathan.

He struggled through the philosophy requirements – a subject that did not come naturally to him. In one class, he wrote a paper strongly disagreeing with the ideas of a philosopher that they had read in class – who was also a friend of the professor. (Nathan got an A on the paper!)

“It was very difficult and exhausting,” said Nathan. But, he found it to be worthwhile: “If I thought I wasn’t getting anything out of it, I would have dropped out in the first term. I have had so much fun with these classes and this program.”

Outcomes of the DSNS program

Nathan set out to achieve this doctorate for personal reasons, not for professional development. “I thought it would be fun,” he said.

Nevertheless, he has seen the results in his current work on the Joint Staff, where he is responsible for the development of future airborne intelligence, surveillance, and reconnaissance systems.

He said: “I am better able to think through issues. I understand the big picture, why things are happening, and what leaders need. The products that I have been able to produce are higher quality and more complete than they were before. My writing is better, and my thought process and planning are much better.”

Nathan also treasures the relationships that he developed with students, professors, and staff at IWP.

In the near future – in addition to taking three more classes at IWP in spring 2022 – Nathan will continue to work within the national security community.

When he eventually retires, he plans to travel with his wife Liuda and spend time with his daughters, Jenny, an architect in Denver, and Val, a sophomore at James Madison University. He may also teach: he is currently developing a course on GEOINT, building from his 18 years of experience as an Air Force imagery analyst and three years teaching at the UK’s imagery school.

No matter what Nathan does in the future, he will always know that he achieved one of his life goals: earning a doctorate from IWP.

Learn more about the Doctor of Statecraft and National Security Affairs