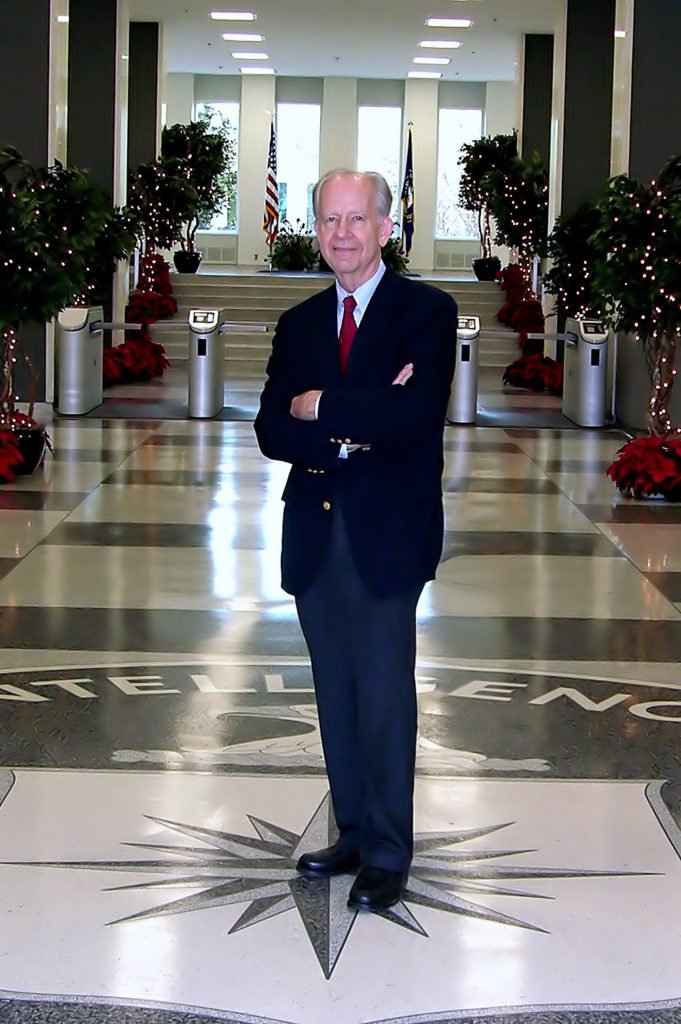 The Institute of World Politics mourns the loss of Professor Emeritus S. Eugene Poteat, who peacefully passed away on May 22 at age 92.

“He was a gentleman,” said Founder, President Emeritus, and Chancellor of IWP, John Lenczowski. “He was soft-spoken. He was a man of serious convictions, but he did not force his beliefs on anyone. He was completely gracious and gentlemanly. He was a great defender of our country and our highest ideals. I loved the guy.”

Samuel Eugene “Gene” Poteat served as a CIA scientific intelligence officer, inventor, association executive, teacher, father, husband, and friend. He graduated from IWP’s Statecraft and National Security Affairs master’s degree program in 2001, earned a separate Graduate Certificate in Intelligence, and was pivotal in the Institute’s success. Prof. Poteat’s colleagues praised his ingenuity and resourcefulness, adding that he was a stalwart man who stood firm in his values.

Prof. Poteat came to IWP upon viewing what he called a newspaper ad the “size of a postage stamp.”  He was seeking to do advanced study in intelligence and was ready to go anywhere in the nation to find the necessary education.  He had two motivations: to study the integration of intelligence with other arts of statecraft in order to optimize the competitiveness of his intelligence consulting firm, and then to teach intelligence in his retirement.

Before enrolling, Prof. Poteat wanted to ensure that IWP was what it advertised. Dr. Lenczowski remembered: “He found us with that little ad, and he decided to take two courses here, the contents of which he already knew very well, just to see if we knew what we were talking about.” The Institute passed Prof. Poteat’s test – and he determined that IWP’s curriculum was worth pursuing. He was one of the foremost experts in the intelligence community. Despite his expertise in the field, Prof. Poteat decided to join IWP as a student even though he was qualified to be a part of the faculty.

When he eventually joined the IWP faculty, Prof. Poteat not only served as a professor, but also facilitated academic relations with other schools, assisted in accreditation processes, provided support to colleagues in the Institute, and became an extraordinarily generous donor.

Throughout his academic and professional life, Prof. Poteat steadfastly believed that good intelligence, backed by hard science, could prevent armed conflict and promote global stability. It was a belief that led him to become a pioneer in his field.

Over the course of his career, Prof. Poteat played a role in significant historical events with the aim of promoting global stability. Prior to his work at the CIA, he worked at Bell Labs and Cape Canaveral, where he constructed missile guidance systems during the Cold War. During his time with the CIA, Prof. Poteat worked on the U-2 spy planes and designed the cloaking system for the Lockheed Martin SR-71 Blackbird – the revolutionary reconnaissance aircraft that still holds the world speed record for air-breathing manned aircraft.

In the summer of 1964, former President Lyndon B. Johnson’s administration asked for Prof. Poteat’s expert option on whether the U.S.S. Maddox was under attack by Communist North Vietnamese P.T. boats in the Gulf of Tonkin. Relying on science and facts, Prof. Poteat determined that the U.S.S. Maddox appeared not to have been pursued by hostile forces. Despite his evaluation, the White House ignored Prof. Poteat, and President Johnson escalated the Vietnam War. Three decades later, Prof. Poteat spoke with the captain of Maddox, who confirmed that he saw no P.T. boats that night.

At the CIA, among his other tasks, Prof. Poteat managed the agency’s worldwide network of monitoring sites and served overseas tours in London, Oslo, the Middle East, and Asia, with his family often relocating with him.  After leaving the CIA, Prof. Poteat held many other positions, including the Director of the Strategic Research Group of the Electronic Warfare Association, President of the Association of Former Intelligence Officers (AFIO), and a member of the Board of Advisors of the International Spy Museum. He was a columnist for The Charleston Mercury and a contributor to AFIO’s Intelligencer journal.

Prof. Poteat was awarded the CIA’s Medal of Merit and the National Reconnaissance Office’s Meritorious Civilian Award for his technological innovations.

One of those inventions resides at the International Spy Museum. On display stands a device that is veiled as a tree stump. Unassuming to the naked eye, the device has a translucent top where the sun shines through to power a solar cell. These “tree stumps” were placed in Russia near the SS-20 Intermediate-Range Ballistic missile-launching base and intercepted the telemetric signals issued by missiles that indicated trajectory and speed, among other data.

Prof. Poteat is also remembered as an advocate for women in the intelligence community. He promoted the admission of women to The Citadel and taught classes on women spies while gaining expertise in the history of women in espionage.

IWP Professor Dr. Christopher C. Harmon commented, “Mr. Poteat had smarts, reserve, a desire to learn, and many other attributes we’d want in an intelligence officer.  I was lucky to work with him in my Terrorism course when he began his studies at IWP, and I thought it was terrific that later this gentleman began to teach here.”

IWP Professor Dr. Marek Chodakiewicz remarked, “A true Southern gentleman, always understated, Gene Poteat was Q before Q and then some, but – unlike in James Bond – no one heard anything about that, as behooves a CIA operative.”

Prof. Poteat and his pioneering spirit will be dearly missed.

Below are some lectures that Prof. Poteat gave at IWP.