The group stopped at McPherson’s Ridge, Oak Hill, the site of Longstreet’s attack, and the site of Pickett’s Charge. Dr. Robbins explained what took place at each site during the 1863 Battle of Gettysburg. 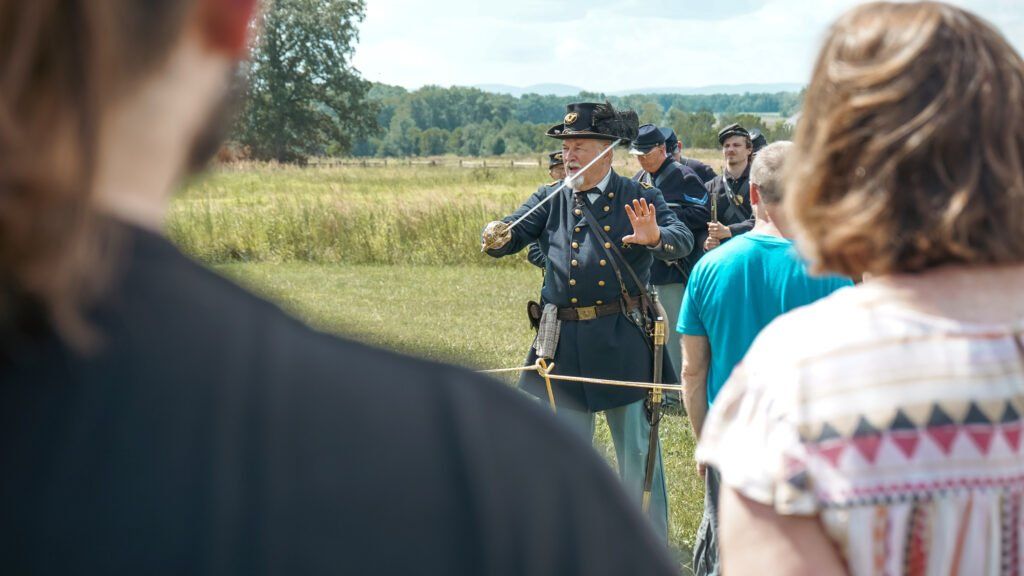 For some of our new students, this was one of their first experiences with IWP faculty.

One student, Maddie, said that “Dr. Robbins was a great tour guide.” Another student, Edward, found that “what was most striking to me was how well people were connected… how clearly this was a fight of brother against brother, father against son.” New student Mason found that “It was interesting to see the distances that the soldiers were covering.” His favorite part was “hearing about the stories of reconciliation and brotherhood, especially the Peace Light Memorial.”

Meanwhile, Maddie said that she is “excited to learn about topics at a deeper level” in IWP’s M.A. Statecraft and International Affairs program. Laren noted that “all the connections that are made here to future employment are going to be very beneficial.” Edward said that he looks forward to “getting to learn from current and former practitioners in the field… getting to know the way they have honed their craft over the years.”

Mason said that he is looking forward to experiencing in the classroom what attracted him to IWP: the combination of a conviction in Western ideals with the ability to look at beliefs that challenge yours. He noted that some of the books on his syllabi are critiques of Western civilization. He noted: “I like that there is that firm conviction, but at the same time, it’s not narrowing intellectual thought.”

Videos of these students may be found below: